All our six ewes had twin lambs this year. We had the chance to observe very caring first-time-mothers and at the same time, to experience variations on the theme “abandons one lamb”, and an interesting case of stillborn lambs. In general, lambing was easy and we didn’t have to assist the ewes much – there were no malpresentations and no prolapses of the uterus or the vagina. We only had to help one ewe because of the large size of one of her lambs.

The first ones to lamb were three young crossbred ewes that where born at our place two years ago (as a result of crossing the Estonian white breed with a ram of 50% Lleyn / 25% Arles Merino) and who were pregnant for the first time (we skipped breeding our sheep the previous season). I hoped to see easier first-time-lambings than those often seen in the Estonian white breed (both at our place and in larger flocks). The ram we had this time was of 87.5% Lleyn breed and was also expected to help achieve easier lambings (lambs with smaller heads etc). This is how it turned out, too. The lambs were born rather small, they have slim heads and they were very active right from the start (their birth weights ranged from 3.5 to 4.5 kg). I am happy that two of the first-time-mothers are very excellent mothers, indeed. 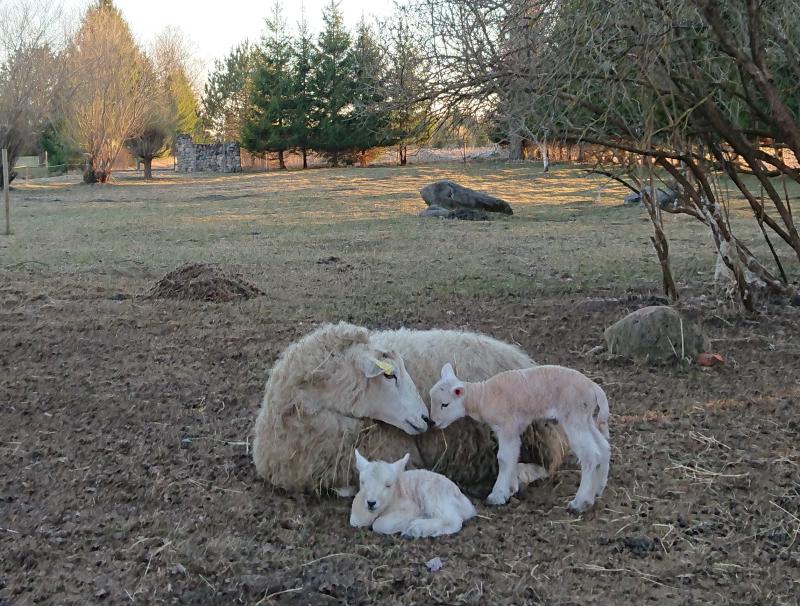 The ewe called Viu and her two-day-old lambs

In fact, the third first-time-mother can be considered an excellent mother as well, if we look at the situation from the point of view of “harsh nature”. She abandoned one of her twin lambs – I found that one in the morning after lambing had happened, under a large bush, dirty with soil, bleating. The reason for the abandoning might have been the fact that the lamb was visibly physically disabled – her right hip was weak and didn’t hold the leg straight properly – the leg kept falling outwards. Even after a week of getting-used-to and restraint, the ewe didn’t accept this lamb. Well yes, she is kind of a wallydrag, but we’ll raise her up for meat anyway. 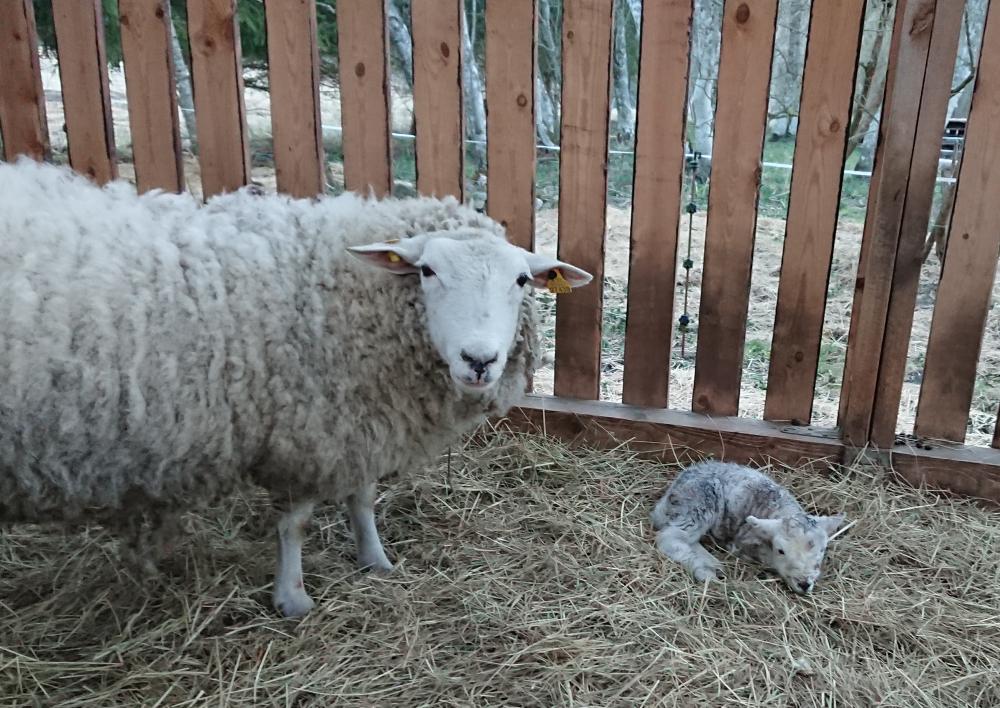 The ewe called Käbin asks, “Whose lamb have you brought to me?”

The Risks during the First Days

The end of April was very sunny – with cold nights, but warm in the daytime. In the beginning of May, though, the weather turned cold and rainy, and in these circumstances we experienced how the lamb of a very good mother can still be exposed to the loss of body heat and hypothermia while on pasture. As we have a small flock and our pasture is near our house, we are lucky to spot such moments of weakness and help the lamb (taking the temperature, rubbing, giving some extra warm milk replacer, placing the lambs under the roof with their mother, and forcing them to suck). If we ever decide to significantly increase our amount of sheep, we must take this experience into account while putting sheep to pasture – how easily the lambs succumb to hypothermia during their first week – the more so, the more the mother moves around while looking for forage. Looking at this photo, the naive viewer has no idea that one of the lambs of this excellent young mother has actually forgotten to suck or has failed to follow the mother in the meantime, and is losing her temperature. 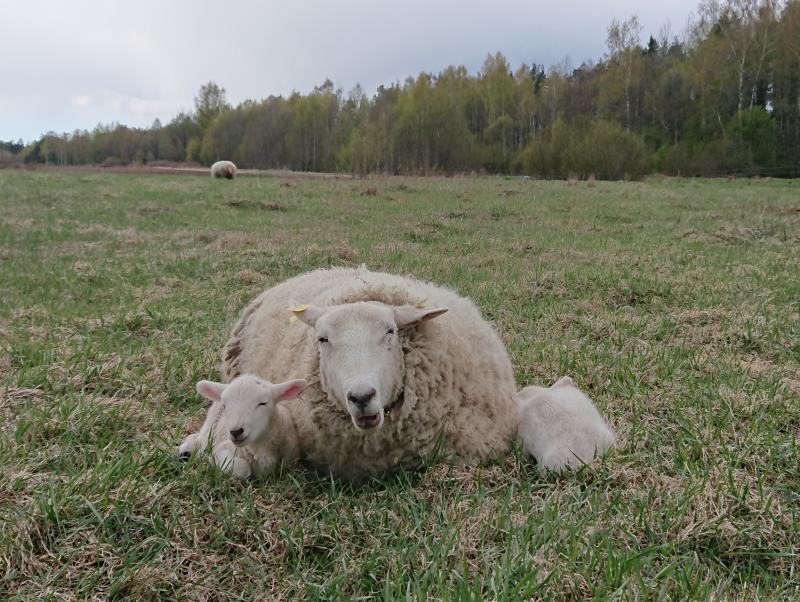 Of the three 3-to-4-year-old Estonian white ewes that had lambed before, only one was independent this time. However, for a moment while her lambs were a couple of days old, she had some sort of problem with milk supply or some other temporary issue, so she started to refuse to feed her ewe-lamb. We kept the family under the roof, confined for a couple of days and I fed the ewe more than the others, after which life continued as normal. So this is our second lesson that we learned on the risks during the first week of the life of lambs – make sure the ewe gets enough of (supplemental) feed, so she can keep up with the sudden increase in the demand for milk. 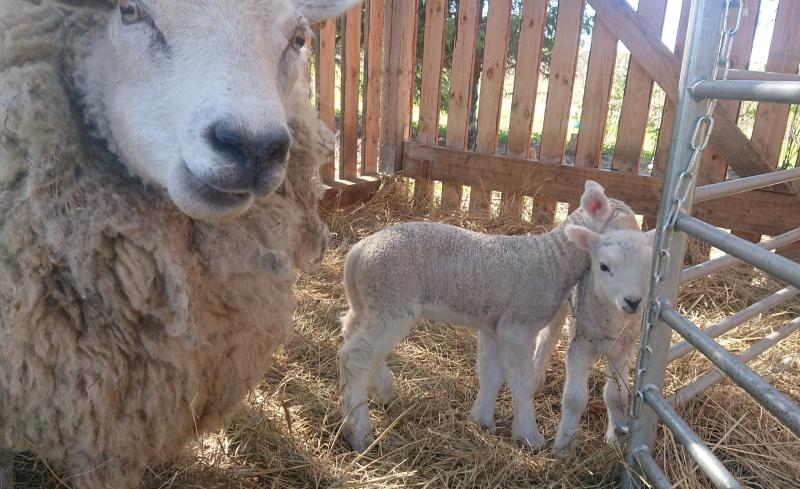 Why Does a Ewe in Lamb Sit like a Dog?

The final two lambings were the hardest ones and quite interesting, at the same time.

Our 3-year-old Estonian white ewe, too much to the fat side, behaved in a weird manner for about two last months into her pregnancy. She kept sitting up like a dog. We thought maybe she was expecting triplets or even more lambs and that was the reason she had a hard time lying down. 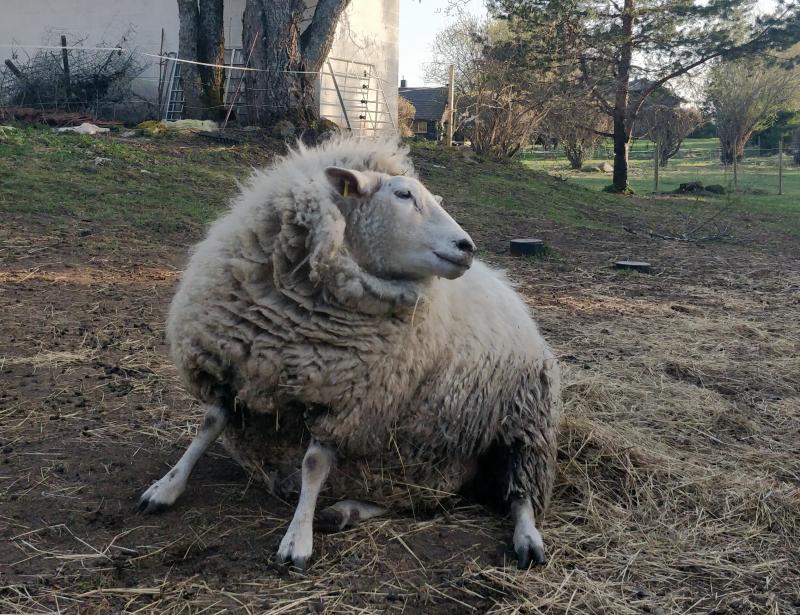 The ewe went into lambing on the deadline (the evening of the 147th day), but I observed a brownish-red thick fluid oozing from her vagina, which didn’t look quite right. It didn’t smell bad though. By the morning, the ewe had delivered a very large dead lamb – half of his body was on the ground, the head was cold, the body was partly still inside the ewe. On the ground, under the dead lamb was something I couldn’t figure out in the beginning. It turned out to be the mummy of a lamb whose development had ceased quite some time ago. Based on some literature, we think that lamb died about one to two months before lambing happened. We were really confused about how this lamb hadn’t started to rot and caused blood poisoning to the mother. Consulting with specialists, we learned that rotting hadn’t happened because the uterus is a closed, anaerobic environment during pregnancy. Moreover, we learned that it’s not very uncommon to see lambs in such different phases of development being born!

For comparison, I will include photos of the large dead lamb (totally developed and ready) and the mummy both inside the foetal bag and having been taken out. 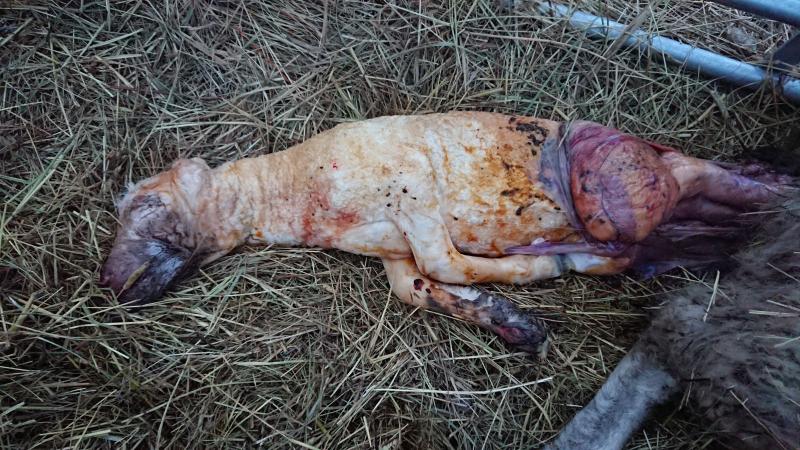 The large dead lamb after I pulled it out 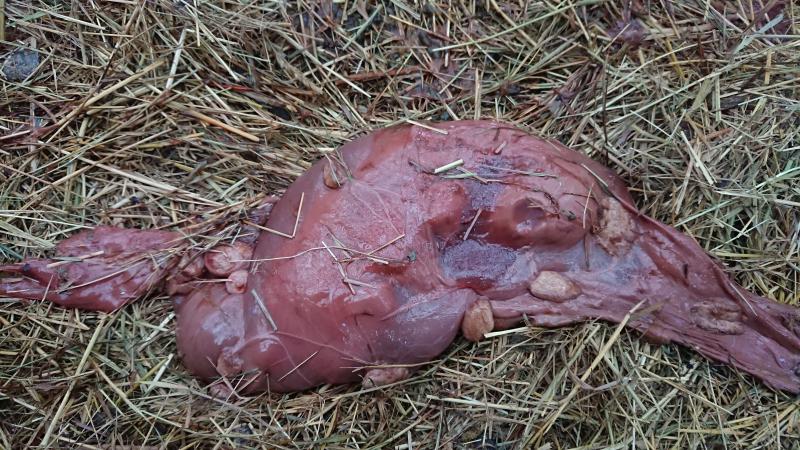 The mummy, as found under the dead lamb, inside its foetal bag 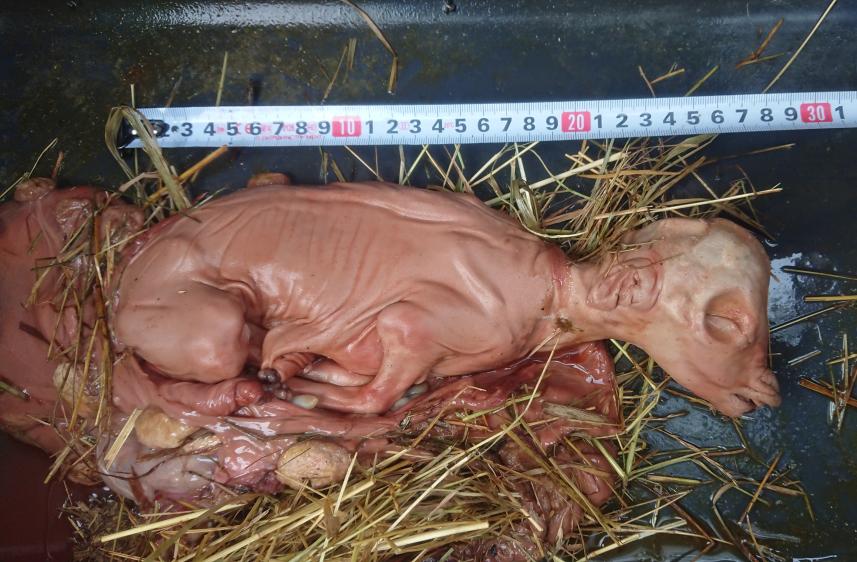 The mummy, out of its bag

More on the sitting posture. We learned that a dead lamb doesn’t move around as expected in the uterus, gets stuck in uncomfortable places and impedes the mother’s breathing with that. So it is assumed that the sitting posture relieves the situation.

The Sloth and the Assistant

The very last lambing brought our record of birth weight this far (6 kg), and along with this large ram lamb, a much smaller ewe lamb was born (to our surprise, the birth weight was not under 4kg though). The ewe licked both at first, but then decided not to feed the ewe lamb, and stopped licking it. She hasn’t changed her mind after a week of effort on our side. It’s possible that the mother was very exhausted after delivering the ram lamb – after a couple of hours of straining and screaming by the ewe, we helped her deliver that lamb. By the way, the ram lamb had a similar defect to the abandoned lamb I talked about above – less visible, but still obviously a weak hip - but this is not a problem for his mother.

The two lambs are like day and night – very different in their behaviour. The ram lamb spent the first several days of his life basically sleeping, except for small feeding sessions. Now older than a week, he still runs with the rest of the flock of lambs a lot less than others do. The small ewe-lamb, on the other hand, is quite enterprising and found a method of hijacking the mother’s teat – while the brother was standing as if sucking, the mother was satisfied but in fact the ewe-lamb was sucking instead. We described this behaviour as “assisting the brother at sucking” and thus named the ewe-lamb Assistant. Unfortunately, Assistant didn’t get enough milk by hijacking the teat so we have to restrain the mother from time to time and also feed the lamb from the bottle. We respect her energy and strong will to live and help her happily.

Feeding is made quite easy for us by the lucky coincidence that the ewe likes to spend time ruminating in a pen that has a gate. 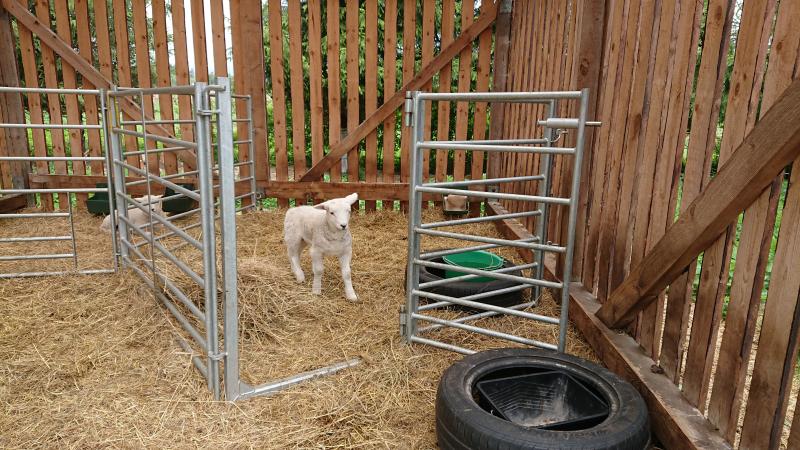 The “milking” pen with a gate. The Sloth has just woken up 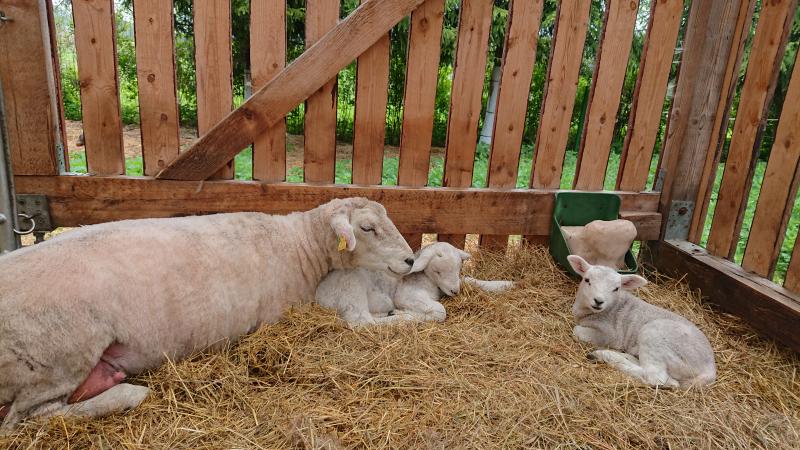 The ewe called K has gone to the pen again voluntarily, waiting for Sven 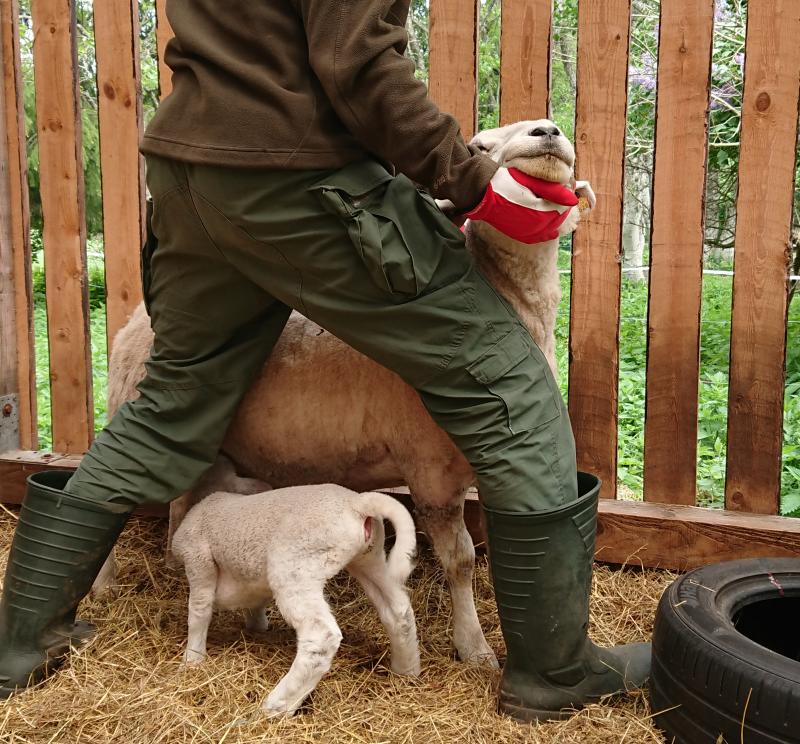 Sven holds the ewe so the Assistant can suck

They Grow So Fast!

Time passes quickly, the lambs grow and already in the end of May, the young mothers, shorn by Sven who has just passed a course in shearing, can enjoy some time off by themselves and go out cleaning up the bush.

The elder lambs have formed a gang, they “stay out late at night” and go climbing on a pile of rocks cleaned of bush by their mothers. 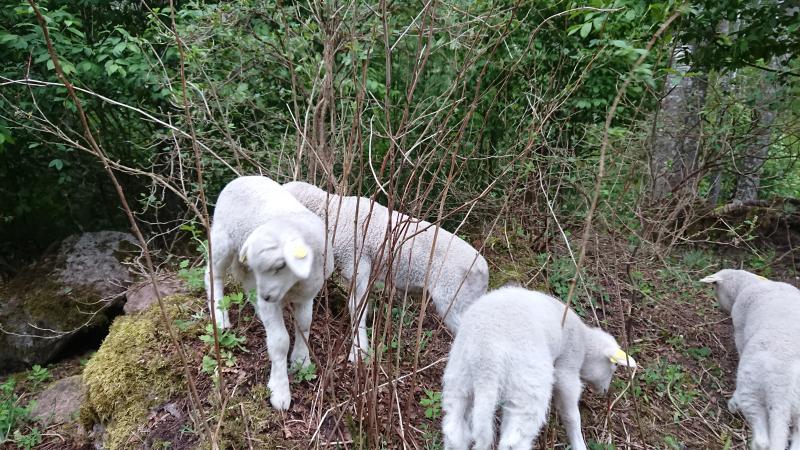