Motivated by an earlier post, I decided to investigate what are some of the possible reasons why some eggs contain blood spots or small pieces of meat-like stuff. I was wondering if I should do something to prevent such eggs being laid. Because only one of our ducks is laying at the moment, it is a good moment for making plans and creating hypotheses.

The biggest risk that comes along with eggs containing blood or other stuff is that if some of those eggs end up in the customers’ kitchens, we may do lots of harm to the popularity of duck eggs. While duck eggs are nutritious and taste good, they are also expensive and not very popular. I wouldn’t want to cause any loss to ourselves and other people who raise ducks – I would rather like to see duck eggs more widely available and I would like more people to discover them.

Another risk is that of contamination and explosion during incubation.

Some Types of Internal Defects of Eggs

Broadly speaking, I have seen four types of internal defects, of which two look like blood and two look more like meat tissue. The first three photos were taken in the September of 2015, while the fourth one was already shown in the earlier post mentioned above. 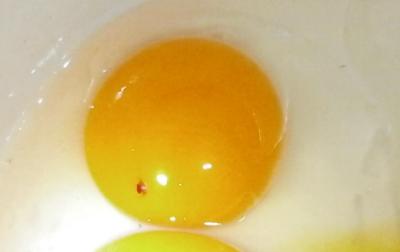 A large “something” of blood: 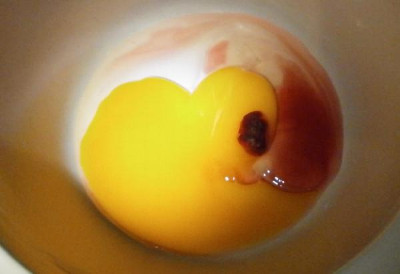 A small piece of meat-like tissue: 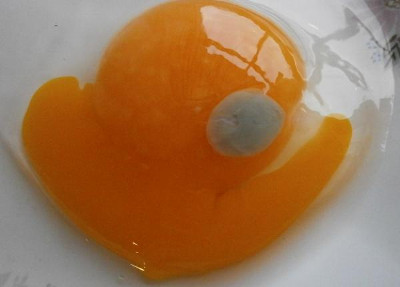 A large piece of meat-like tissue: 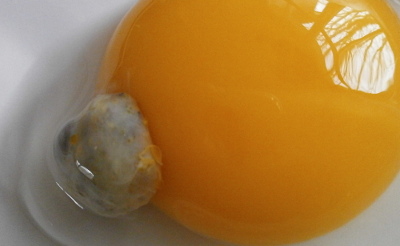 The amount of information available on duck eggs is relatively small so sooner or later you end up reading about chicken eggs. The life cycle of eggs is quite the same for both ducks and chickens though, so it’s OK.

As it turns out, the blood is, well, blood, and the meat-like tissue is, well, mostly tissue. For instance, there are those nice explanations:

As to the possible reasons, what I can relate to are some disturbances (predator birds), some accidental changes in our lighting scheme (a power outage now and then and some failing electronics in the duckhouse) and the aging of our birds. Our first ducks will turn three years old in a month.

I don’t think the defects are a result of blood but I can’t be sure. The feeding ration of our ducks is about 2/3 layers’ (chickens’) pellets and 1/3 wheat; in the summer they forage all kinds of additional flora and fauna in the garden.

What I may also suspect especially with the blood spots is the large number of young drakes we had this summer and autumn. Too much physical pressure?

Plans for the Next Laying Season