Every now and then I find myself discussing the topic of sheep eating stinging nettles (Urtica dioica), when I meet other shepherds.

We discuss whether eating nettles depends on the breed of the sheep, the season etc. Usually the problem seems to be that sheep, when grazing natural pastures, don’t destroy nettles well enough. Our experience confirms that they don’t, but it is becoming clear that once the shepherd accepts nettle growing all around in vast quantities, sheep will learn to get the necessary nutrients from this plant. I even think that maybe by eating lots of nettle, sheep point at some weak spots in their wintertime or springtime feeding.

One thing seems to be clear: if you desire a perfect lawn or a pasture that looks well taken care of, you’ll have to cut nettles from time to time, manually or using machinery (scythe, trimmer, tractor). On lawn taken care of by sheep, it’s very likely that bush of nettles like these will be left growing, even if a sheep sometimes eats a bit of the plant: 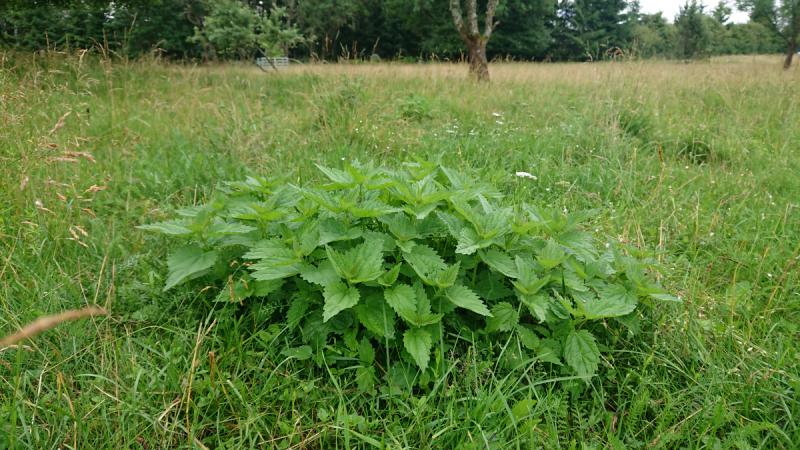 I myself have repeatedly seen how sheep graze very neatly around nettles, but won’t touch nettle. Here is a lamb just a couple of months old, demonstrating that she knows how this is done:

In the following picture, a couple of ewes are grazing with their lambs on a pasture that has loads of nettle. If one observers their behaviour closely, one will see that if they are not in the mood for nettle, they seek out all other kinds of plants from between the nettle (including Galium aparine, cleavers) which leans on nettles for climbing up. This results in paths being trampled into the nettle area. 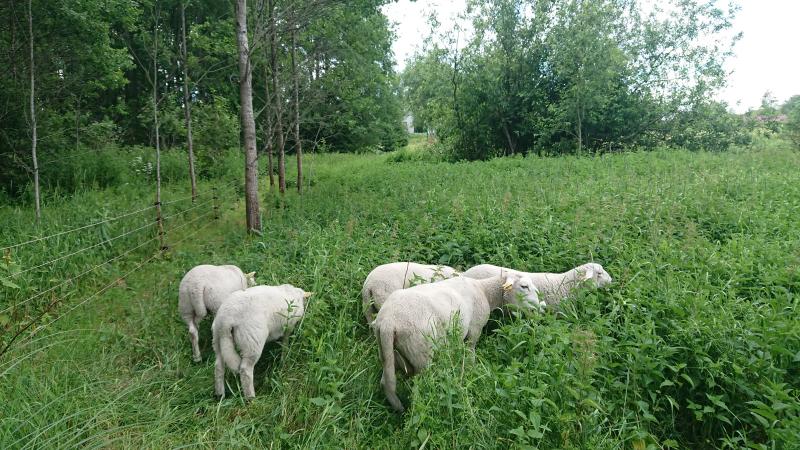 Our experiences this far: sheep eat nettles mostly in the autumn

Based on our experiences this far, I thought that sheep mostly eat nettles in the autum, and that they mostly eat the tops which contain seeds, and that they often become interested in the plant after the first night frosts have passed. At the same time, I haven’t tested if the nettles sting less after night frosts, and I haven’t looked for information on the change of nutrients after the frosts. We have learned by observing sheep that as they approach nettles, they turn their lips to a shape that helps them avoid the stinging, and this skill seems to be passed from ewe to lamb.

Lactating ewes in a field of nettle

This summer, I have discovered that some of our adult ewes eat nettles aggressively in the middle of summer already, and some even bolt down their big leaves. Their favorites seem to be the plants that grow on a new pasture. This means that this pasture hasn’t received any fertilization in the form of sheep or duck manure in the previous years.

Here a ewe selectively grazes the tops of nettles:

… but here another one picks leaves, in between bolting down the tops:

Because nettles contain lots of iron, potassium, calcium and magnesium, as well as lots of vitamins, I have the impression that such aggressive eating points at a deficit of a mineral or vitamin in the main or supplemental feed of sheep. Or maybe it points at a general lack of nutrients in the sheep as a result of producing milk and suckling.

Wikipedia has this to say about ruminants and nettles:

Ruminants also avoid fresh stinging nettles, however if the nettles are wilted or dry, voluntary intake can be high. Dry nettle shoots are said to be “as good as good alfalfa hay”. As with other leafy herbs with relatively hard stems, the harvest should be done carefully to avoid leave drop losses. Nettle can be conserved as hay or silage. (Wikipedia: Urtica dioica)

In our small flock, we have noticed a growing habit of eating stinging nettles. Also we have observed how this skill or habit is passed from ewe to lamb. Because we have almost given up mechanical mowing of our lawn, and depend more and more on sheep to do this job, I hope that their skills at eating nettle can improve, too.