A couple of years ago we had an unexpected lambing season when some of the young ewes we had rented as grass mowers, decided to give birth in the middle of May. We managed to help one of them, but failed with another, and two others were successful independently. They had no special feeding and we had no idea we should look for visual cues of an approaching lambing.

Fast forward to last fall when we bought a ram who did his job very well, and we were expecting the lambing to start in the end of March this year. A month later we have 8 nice lambs running around and growing, but the process has been rather adventurous. 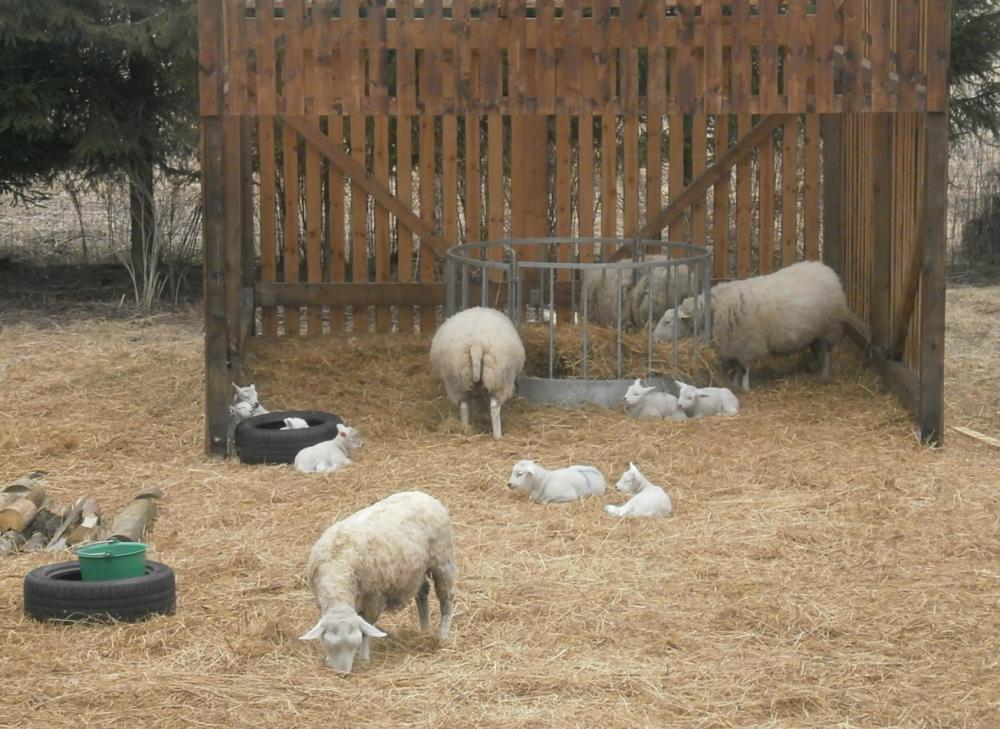 Here are some basic data about our five ewes.

They are all of the Estonian White breed which is actually a combination of one or more from the set of Texel, Dorset, Dala and Norwegian White. The ram (read more here) was 1/2 LLeyn, 1/4 Arles Merino, 1/6 Gotland + misc.

We had an ultrasound scan made a bit too late so we knew they were all expecting lambs but the number of lambs in each ewe could not be determined.

As the sheep live close to our house we noticed exact dates of mating for four of the ewes. All of them started the lambing process more or less exactly on time (based on literature I used 147 days as the number for making the estimates). Also, the udders started to visually develop around two weeks prior to lambing. So this was all by-the-book.

Only the experienced ewe was independent – we helped all the first-time mothers after they had kept straining for a couple of hours.

The first one to give birth was the ewe called Krõõt. We had to help her a bit, but she has been a wonderful mother right from the beginning. Here is a video of her and the male lamb Tõnn on the first morning.

All the rest of the first-time mothers were more or less troublesome but now that a month has passed, some characteristic maternal behaviour can be observed. For instance, riding on the back of Mom when she is ruminating is cool if she allows this!

Here is a photo of the ewe called K with the lamb that she accepted as her own (see below for details). She is a patient mother and we hope that next year, giving birth to twins won’t make her so confused as to rejecting the first one. 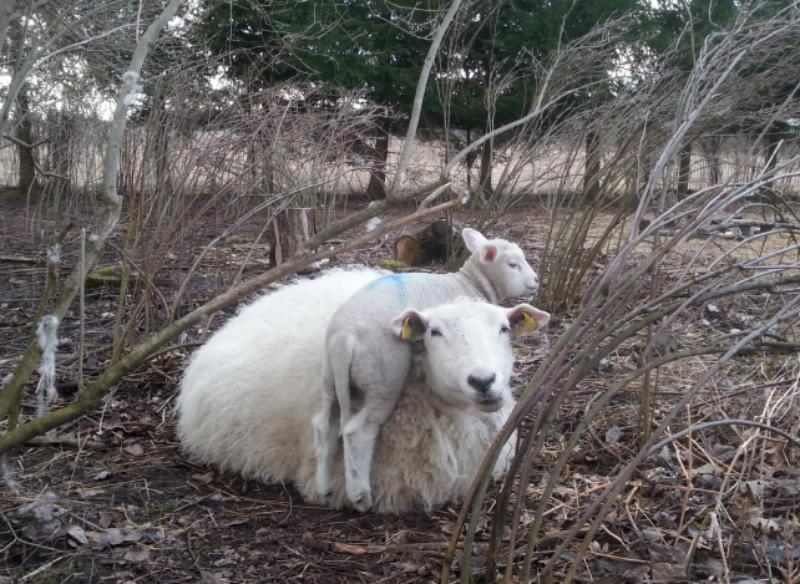 Look Mom, I Have No Anus!

The ewe called B had three lambs. We had to help the first one get out because it had its rear end in front, with knees bent. The ewe was obviously tired of the event and didn’t show any signs of interest towards the lamb. Because the lamb was losing heat due to the cold night, we gave it some colostrum powder drink and took her to our house to warm up. The next morning the guy seemed a bit bloated and kept baaing. Fortunately it occurred to us to check if the lamb had an anus. It turned out that he didn’t. The picture looked liked this: 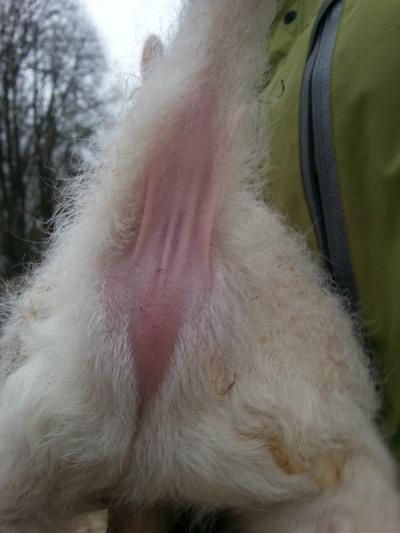 As a result of Googling and checking some books, we decided to cull the lamb. We would have had no energy to deal with a surgery and the possible side effects, nor would this have been economically reasonable. From the literature we have read that missing anus is more common in the case of triplets and is likely to be caused by the lack of resources.

Getting used to Being a Mother

Our youngest ewe called C accepted her lamb after being constrained with him for several days. During the first days she was restrained by halters and we had to visit her regularly to help the lamb suck. As days passed she got used to the lamb and finally even starting “talking” to it as ewes do. Here is C, still staying with the lamb, but free of the halters. 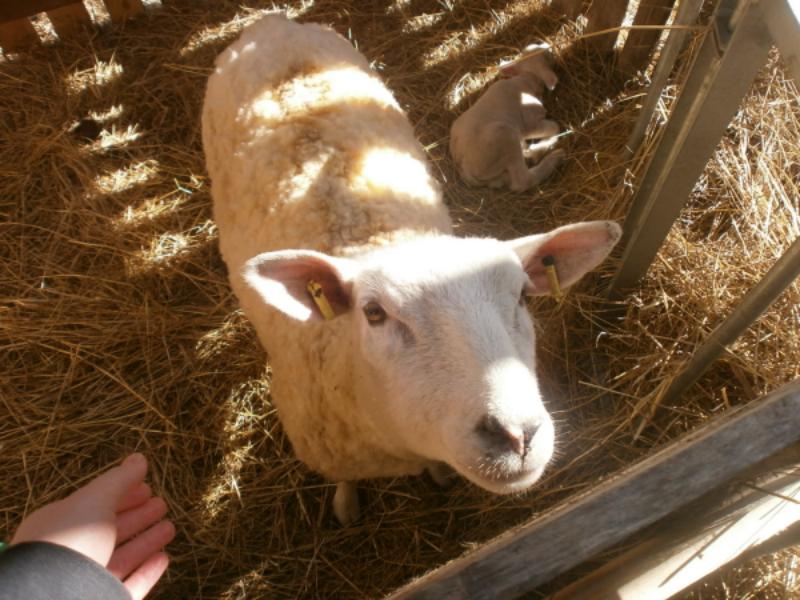 Unfortunately, the ewe that had triplets (the first one was without an anus) didn’t fully accept the rest of her lambs and allows them to suck only when she is eating feed supplements (twice a day).

… or Maybe That Bucket Will Be a Better Mom?

We have one male lamb that basically doesn’t have a mother. The ewe called K is a perfect mother for one of her lambs, but completely rejected the other one and never lets it suck. In order to liberate ourselves from feeding the lamb from a bottle several times a day, we bought a bucket with nipples. After a couple of days of training, the lamb called Kaak became skilled at drinking from this bucket and can help himself independently. The bucket needs to be cleaned daily and taken inside at nights (it’s still far below freezing in the middle of April!) but it’s certainly easier than dealing with the bottle.

We also keep a bowl of starter pellets available for the lambs to eat as a supplement. Several lambs have learned to enjoy this offering.

The bucket and feeding bowl are in a so-called creep feeding area which the adult ewes cannot get into due to their size.