We have been acquainted with the folks at Murese sheep farm for a couple of years and we bought our own first sheep (as lambs) from them last year. I have grown extremely keen on sheep and I enjoy taking care of them, so for me, our sheep have turned out to be more like close friends than lawn mowers. 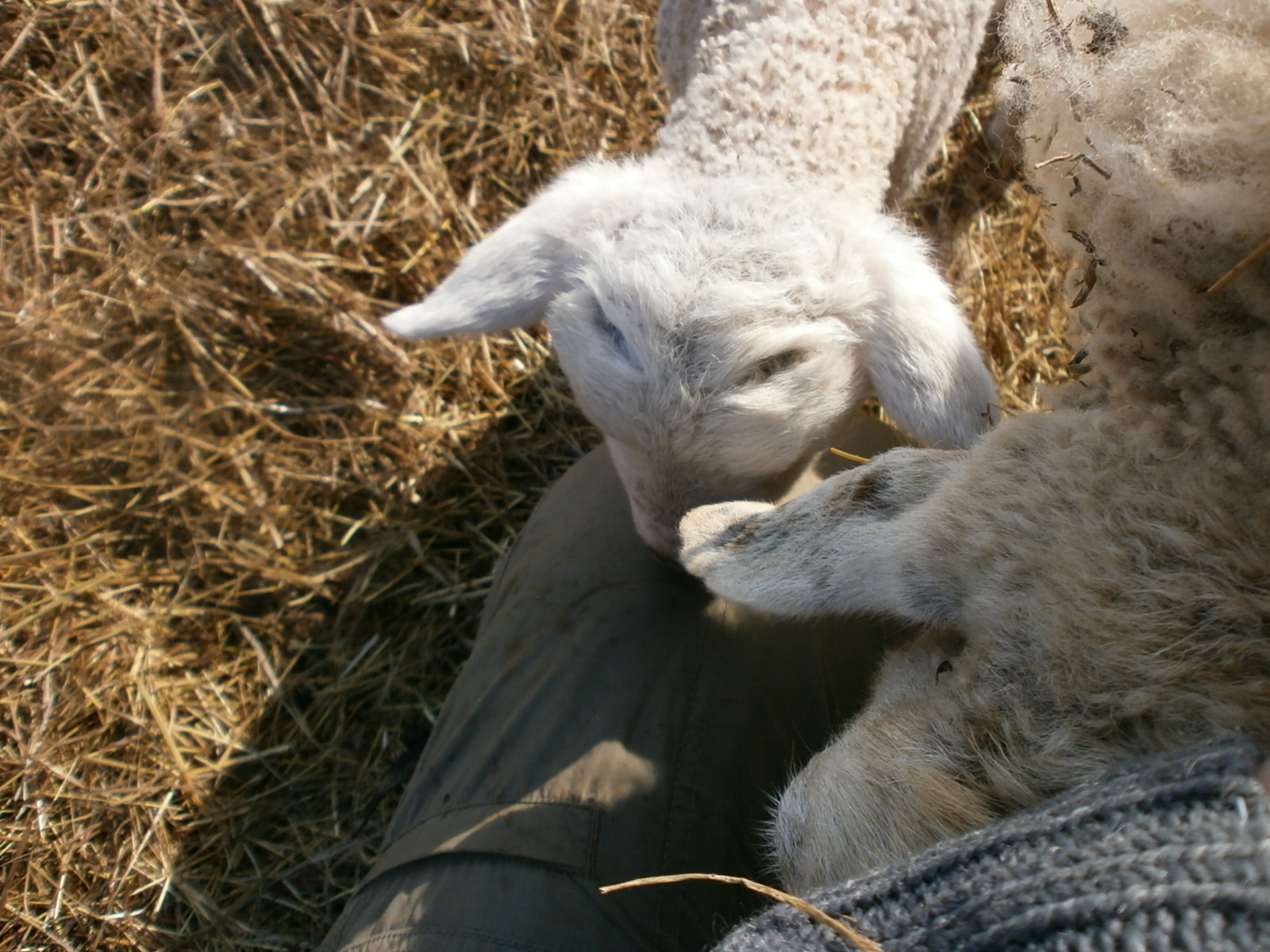 The Murese farm is part of two networks for volunteer work (WWOOF and Workaway) and they have been hosting volunteer farm workers from around the world for years now.

Because of my newfound love for sheep, I decided to spend 5 days at the farm during the lambing season, basically as just another volunteer, hoping to be more of help than of a burden. I wanted to learn to take care for newborn lambs and generally get the experience of working daily at a farm that has about 400 ewes and about the same number of lambs being expected this year.

The 5 days I spent at Murese turned out to be a perfect match of people, weather, natural timing and, well… a lot of sheep. 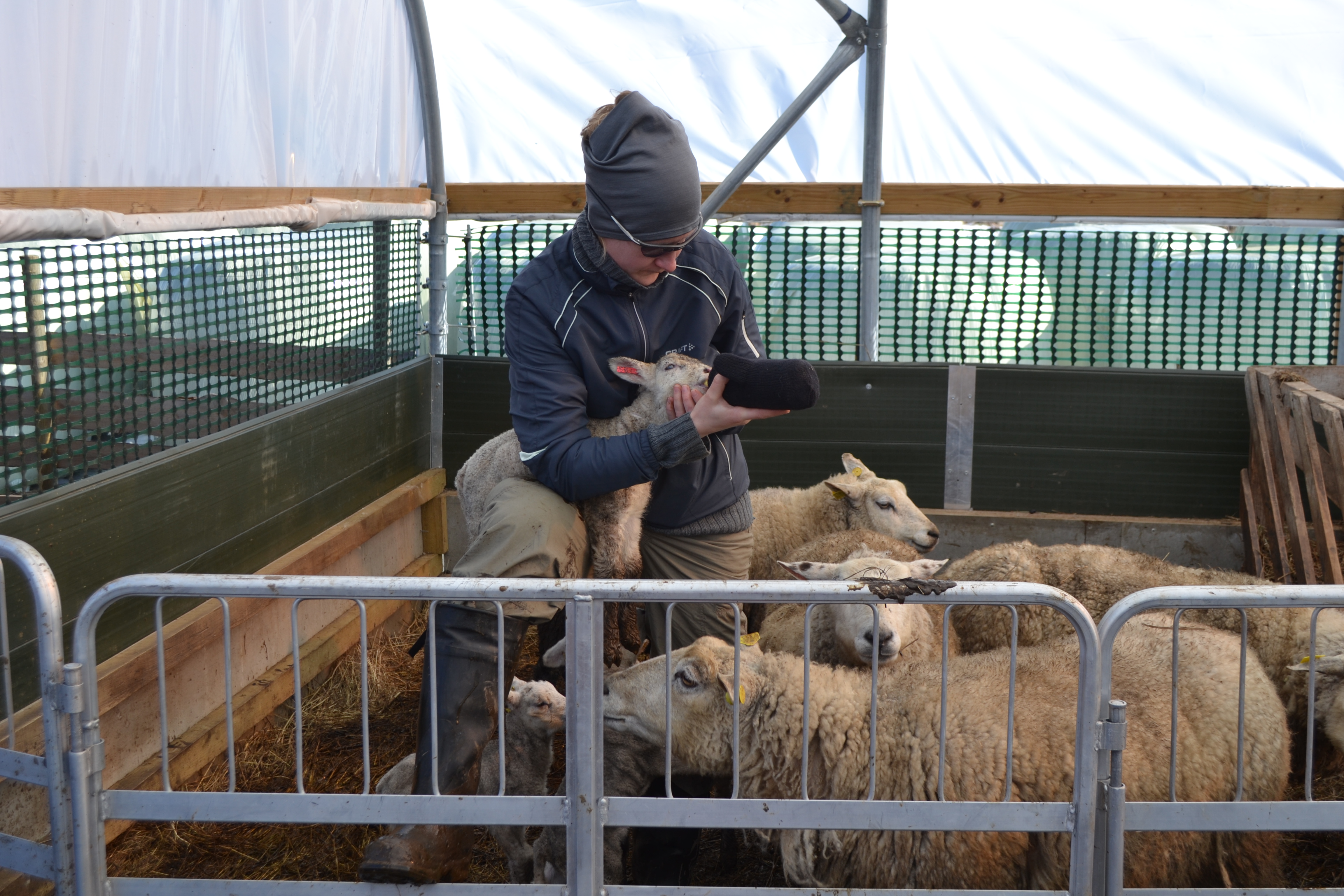 I asked Mirja to wake me up every morning at around sunrise (at about 6:30) so that I could accompany her to the first round of the day, checking the sheep. We had to go to two different areas surrounded by wolf-proof fences, checking for whether the newborn lambs had been able to feed by themselves, whether the ewes had recognized their lambs at all, whether any ewes had problems with giving birth etc. 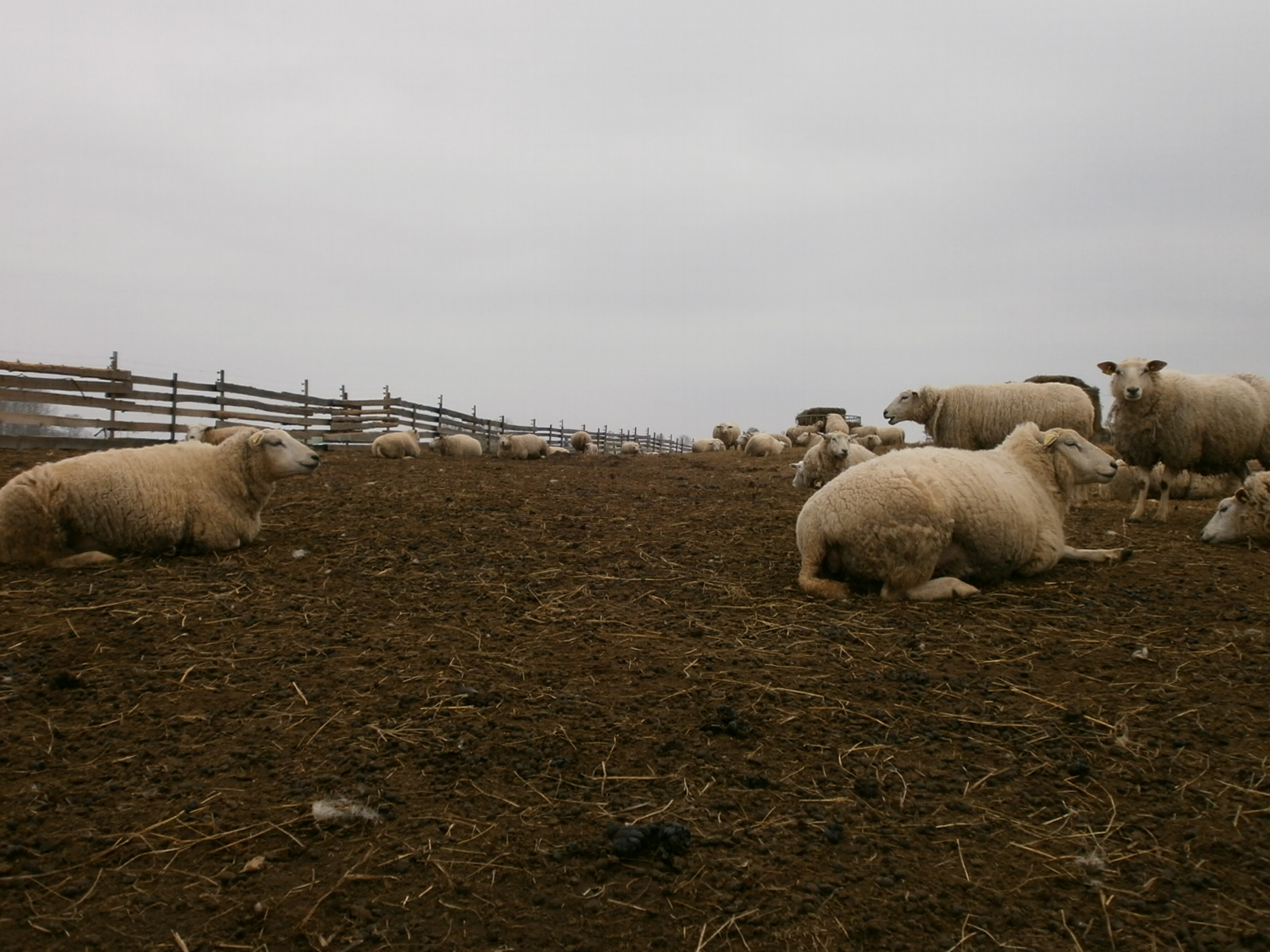 A Landscape of Sheep

Right after these checks we had to visit the ewes and lambs that were separated into pens, to make sure they got fed. Most of these ewes were foster mothers. Some ewes had to be forced to stand against the wall of their pen, so that they would not kick the lambs trying to suck milk. Some lambs also had to be fed with milk made of milk powder because they couldn’t get enough from their (foster) mother. Also, there were some more extreme cases such as having to take a cold(ish) newborn lamb under the warming lamp and check their well-being.

Roughly all these activities had to be repeated in the afternoon and in the evening. I guess I spent around a full working day (8 hours) around sheep and lambs each day, some of which I simply wandered around by myself, and some of which we spent in co-operation with Mirja and Eve, and to a lesser extent with Madis and the really wonderful volunteer Karen.

In retrospective, I have to admit I had no skills regarding the ergonomics of taking care of sheep and lambs. I learned postures that are comfortable for feeding lambs and restraining the ewes, so that my back would not get too tired, etc. Also, I had to make sure I would switch the supporting leg from time to time when feeding lambs, holding them on my raised knee. I guess it’s partly due to my profession (I am a software developer) that many of the muscles used for physical work have been in a kind of a sleeping state. By the evening of the second day, all these muscles that I normally don’t use much, were hurting. After that, I got used to the movements and enjoyed a lifestyle that does not make me sit all the time. For a female body, lifting heavy things (such as large water containers) is a problem, however. Also, it takes a lot of effort to push a ewe from the backside if it is necessary to move her to a pen, for instance.

One thing that takes some getting used to, is hygiene and spending time in the environment of all kinds of bodily and other fluids. Where there are sheep, there is inevitably manure and urine, and when you feed lambs or help ewes give birth, you get dirty with some manure, urine, birth-related fluids both on the clothes and on the body. At the same time it’s not possible or at least comfortable to do certain things with gloves on. I guess it would be possible to find suitable, thin rubber gloves, but that would mean an extra expense and more trash. I got used to the fluids quickly but I noticed that on the second day, I was annoyed by a sort of sweetish smell caused by manure, urine, silo, milk etc. But I grew used to that smell quite soon, too. 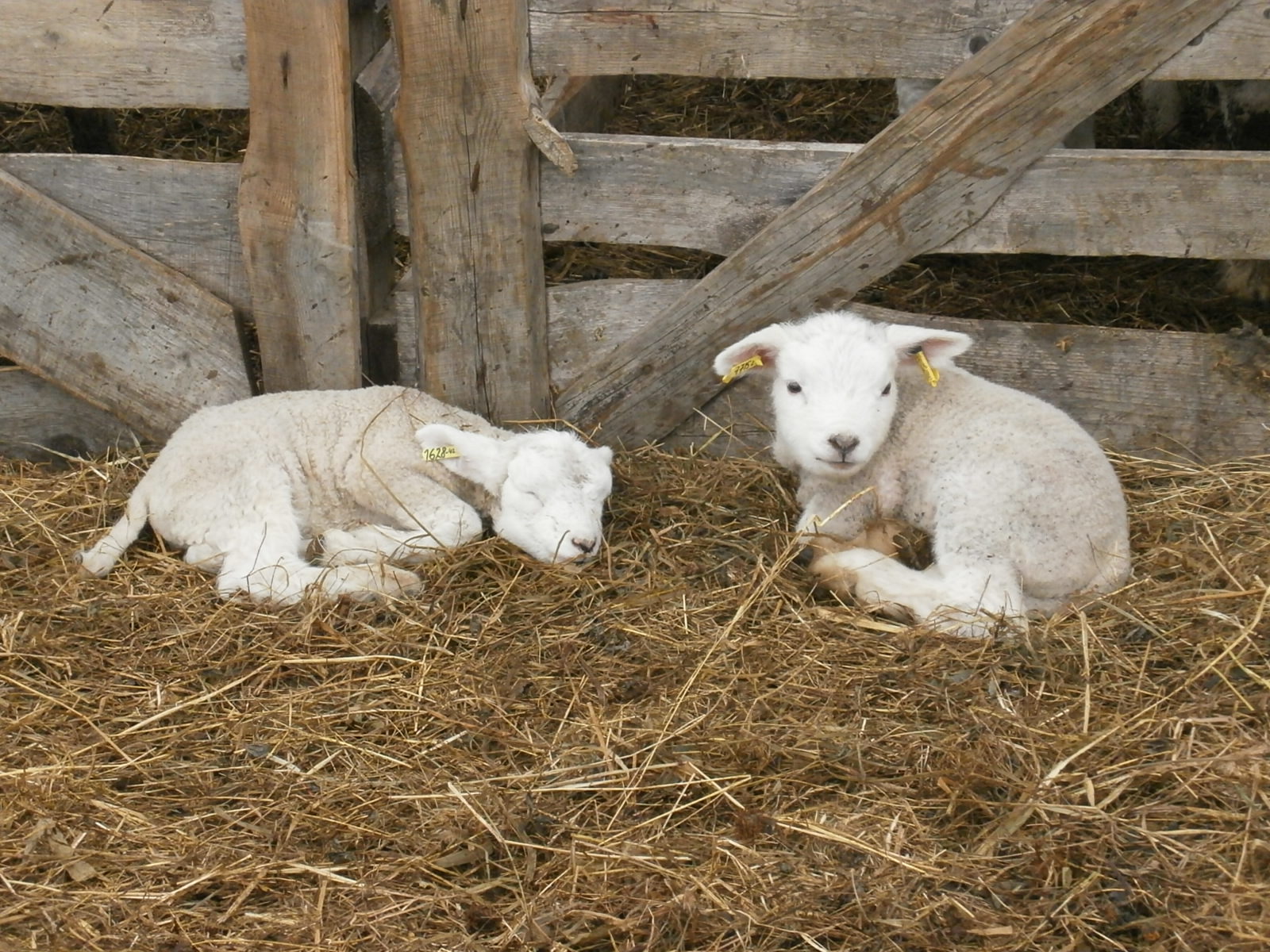 Lambs spending their day by a pen

An interesting thing I noticed is that ergonomic, more or less waterproof outdoor sports clothes are really comfortable when working in the barn. Including the possibility for layered clothing because in early spring, it is cold in the morning and in the evening but quite warm during the day if it is sunny. I might as well have posed for the company Craft, amongst the sheep, the manure and hay, for commercial photos .-)

I had my most extreme experience, as far as existential experiences go, right on the first day when I followed Mirja to check the sheep. We had to help a ewe give birth, and the ewe had to be killed right afterwards because of the hard birth. I have never seen birth and death side by side so closely in my life. However, I must admit that this event was something quite natural and peaceful for me; I didn’t feel uncomfortable or any other feelings at all. I kept rubbing the lamb to keep it warm and fondled the dying ewe. In a couple of days, we had the ewe as meat and it was delicious.

The most important feeling I took home with me is a kind of happiness and certainty that I fit well with sheep and people working with them. Taking care of sheep daily, in a farm like Murese, didn’t become an annoying chore for me. Rather I felt glad every day, and I felt a kind of pride that I can spend time with sheep in this manner. I realized that if I get fed up with being a software developer one day, or should I run into some sort of health issues and not be able to do my job anymore, work in animal farming is a realistic alternative (although not as well paid) that I will probably be able to do well.

Anyway, the days at Murese provided me with an experience for the whole life! 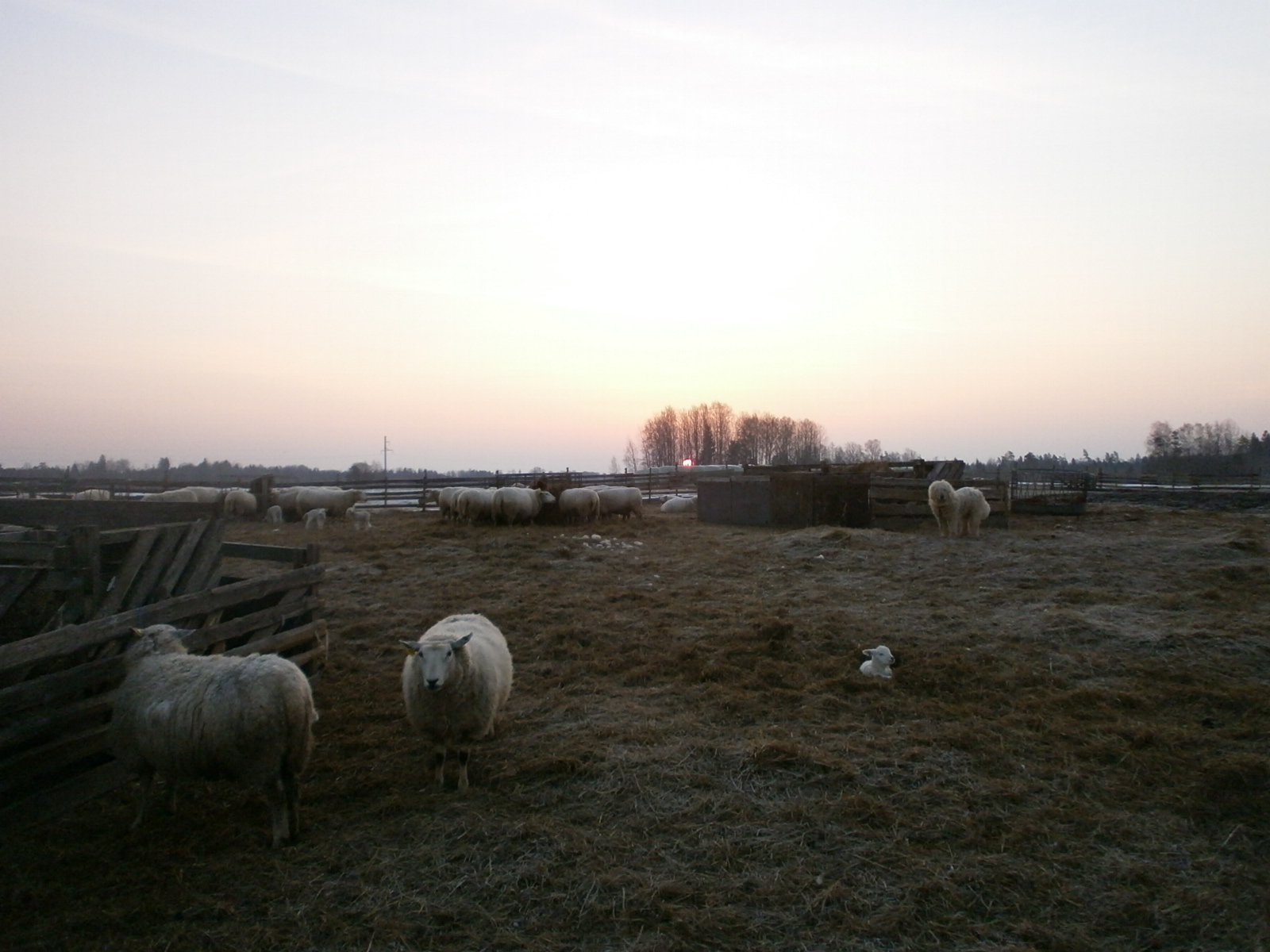