We went to Maamess (an agricultural fair) this spring and on our way there, we visited a sheep farm that we know. There was a box in the corner of their living room with a 2 week old bummer lamb, who preferred to be with humans instead of other sheep. Our previous experiences were with sheep who didn’t want to let us much closer than 10 meters, so such a human friendly one piqued our interest.

One thing led to another and on our way home she was in our car.

At first she lived in our cellar for a week for easier acclimatization and moved to the duck yard after that. 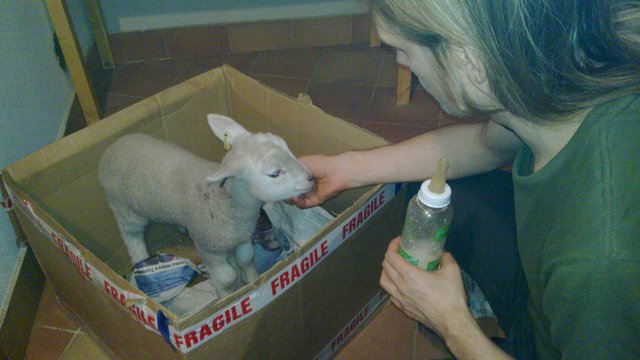 Tuta has been rather weird from the beginning, which is probably caused by some kind of a birth defect. In addition to having no herd instinct, she also liked to run circles around humans (always clockwise) during her first months of life. There seems to be something peculiar about the way in which see sees and hears, sometimes everything seems to be normal and she can notice people coming from more than 20 meters away, but at the next moment she walks into the wall.

Even by the standards of sheep Tuta doesn’t seem to be too bright and we have had to teach her every last skill that a sheep has to have. For example, I think we spent around a month teaching her how to eat grass. To achieve that, we picked grass in front of her and stuffed it into her mouth. It took a couple of weeks before she started eating it but it still took several weeks after that, before she realized that she can eat that grass without our mediation as well. 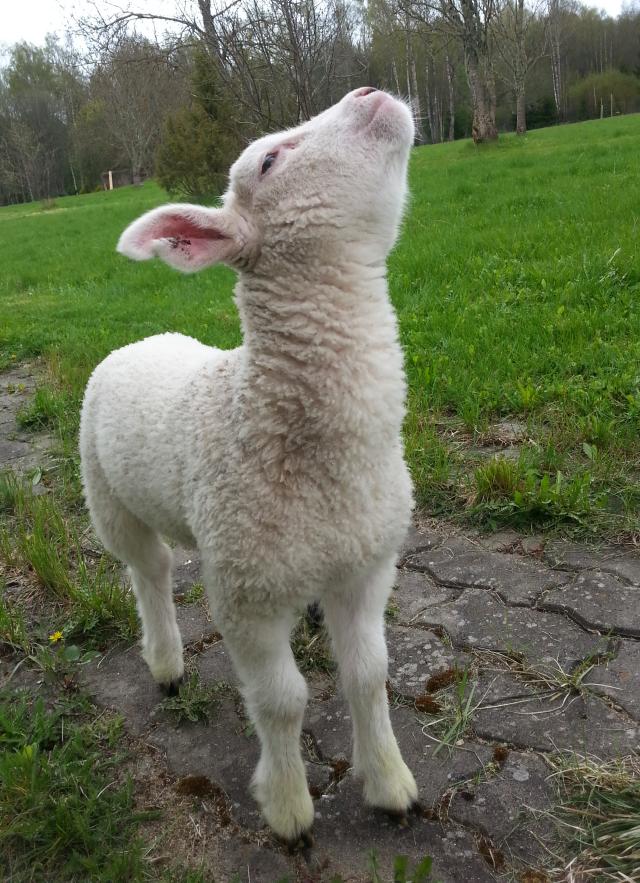 Tuta is also a passionate wanderer which in combination with the bad vision has led her to the pond a couple of times. As surprising as it may sound it turns out that sheep can swim rather well and once she even swam several circles in the middle of the pond before heading for the shore. Her wandering seems to be caused by some kind of an autopilot that sometimes engages, rather than by curiosity.

As opposed to the rest of our sheep, she doesn’t actually have any interest in novel things. She discovers new things primarily through blind chance – for example after we had unsuccessfully tried to introduce her to supplemental feed pellets for several weeks, she happened to stumble into the feed bucket and started eating.

At 9 months of age she is around half the size of others her age, even though she eats both supplemental feed and minerals. 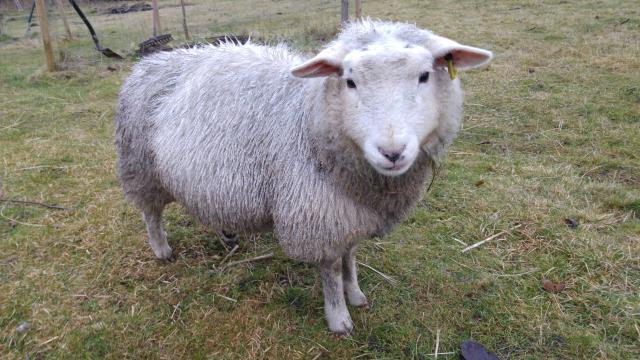 In addition to all of that, Tuta is a die-hard epileptic. Currently she seems to experience shorter seizures weekly. It happens less frequently now than in the summer, maybe things get better as she gets older or maybe it’s just that the bright summer sun triggered more of the seizures.

When seizures begin she usually walks backwards for a meter or so before falling over. Her seizures usually look like she is running while on her side, and sometimes she makes jerking movements (like a fish on dry land). Once she had a really long seizure period which lasted more or less continuously for 48 hours.

It seems that for her, the seizures have a similar function to a computer restart or software upgrade – several times she has emerged from it with some new ability. For example after that really long seizure period she started eating grass by herself.

Our veterinary said that this isn’t exactly unheard of, but since usually production farms cull such animals right away there hasn’t been much interest in epilepsy in sheep.

We keep sheep primarily as grass mowers so we will let her live on as a pet and will see how it goes.

Here’s a video montage of Tuta’s life so far. It even shows some seizures!