How does one design a garden in which ducks, sheep, fruit trees, berry bushes and vegetables must be able to co-exist?

A naive approach for an existing garden would be to build some sort of wired fencing around the beds and plants. However, such structures are not flexible or easily extendable. It’s hard to predict how much space a bush will take in 5 years, and it is quite difficult to build a new fence every year. In the picture below, we can see how sheep find different angles of approaching the bushes. In our case, the fence is connected to the generator for electric fencing, but this again makes it undesirable to let the bushes grow into the fence. And by the way, in the second half of the summer, black currants become heavy and the bushes sink lower and take more horizontal space.

The photo was taken in May this year, when the leaves had only just started growing. 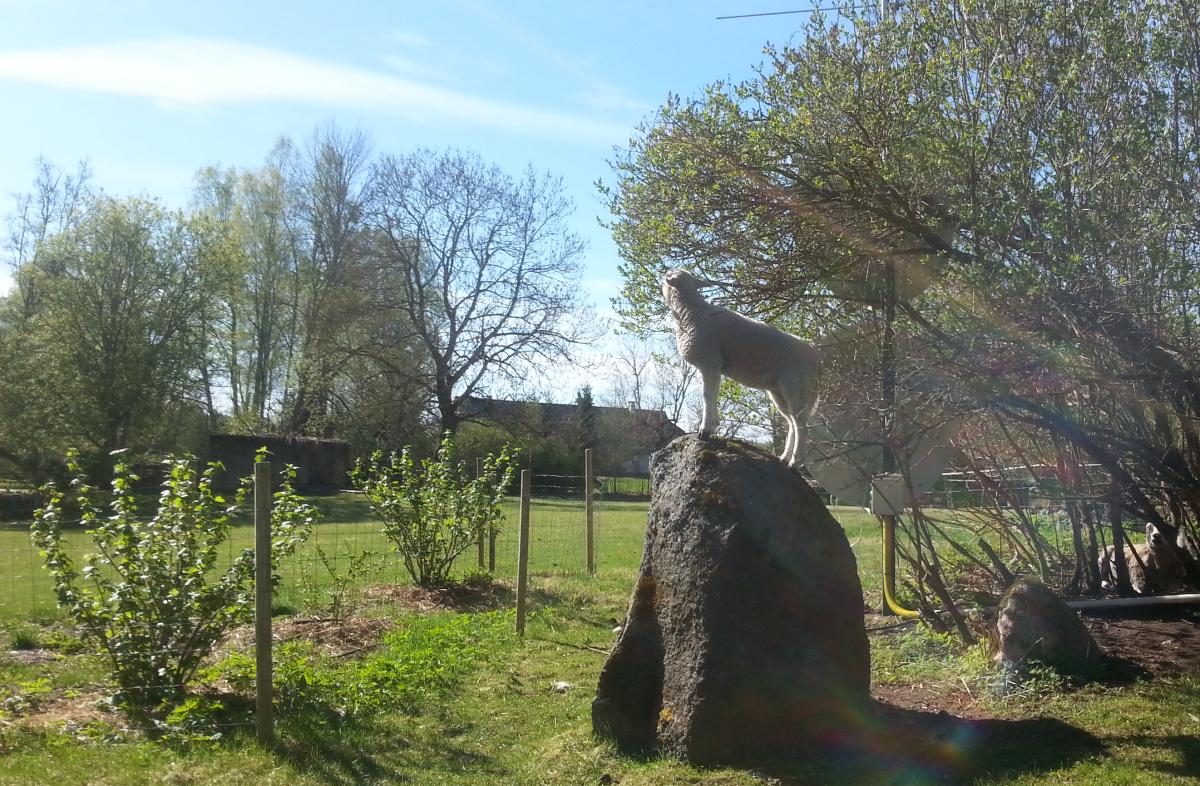 The Surroundings of the Duckhouse

In addition to our ducks and sheep, our laziness has been a factor that affects the evolution of our garden. We tend to prefer spending our time and energy where the activity seems most efficient.

Our duckhouse is situated at the farthest end of the garden, surrounded by a forest from the north, and open to the sunshine from the south. Its location and the water supply available there, have resulted in an expanding garden of berries and vegetables developing around it during the past 5 years.

The vegetable garden keeps getting larger between the duckhouse and the rest of the garden as a kind of belt through which ducks still have to be able to get to the pond.

Initially, the duckhouse was surrounded by a wire fence built by the previous owner of our property, and that fenced area was simply surrounded by grass. We bought our first ducks in the spring of 2013 and also planted some young bushes and fruit trees in that summer. This fence is still there, because it enables us to keep the ducks outside in a limited area, if necessary.

In the autumn of 2013, the view towards the forest behind the pond looked like this: 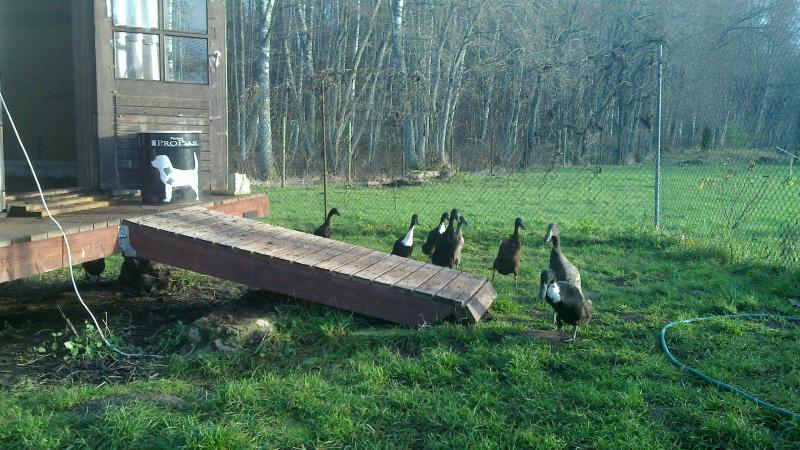 Early in the next spring, the bushes were not in leaves yet and the view from the pond towards the duckhouse looked like this: 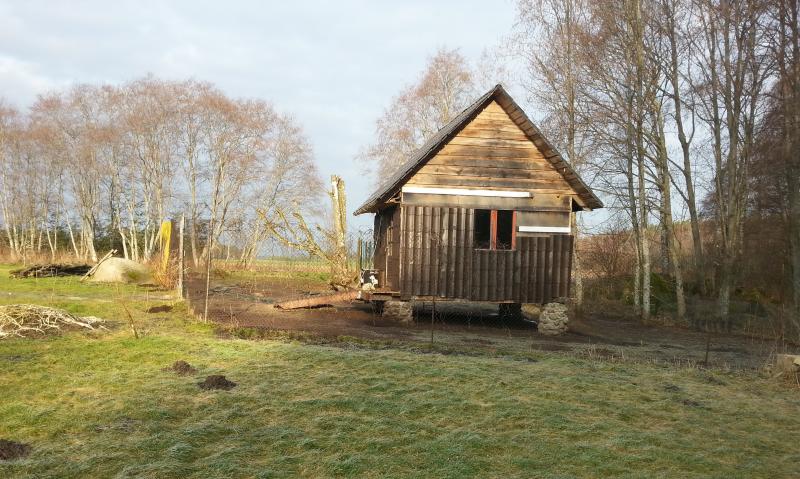 As we got our first sheep in May 2014, we had to protect the bushes and the trees planted outside the fence of the duckhouse. We used some mesh material bought from the construction store around the young apple tree (that mesh lasted only for a year in the sun), and naively enough, we built some wire fencing around the bushes. 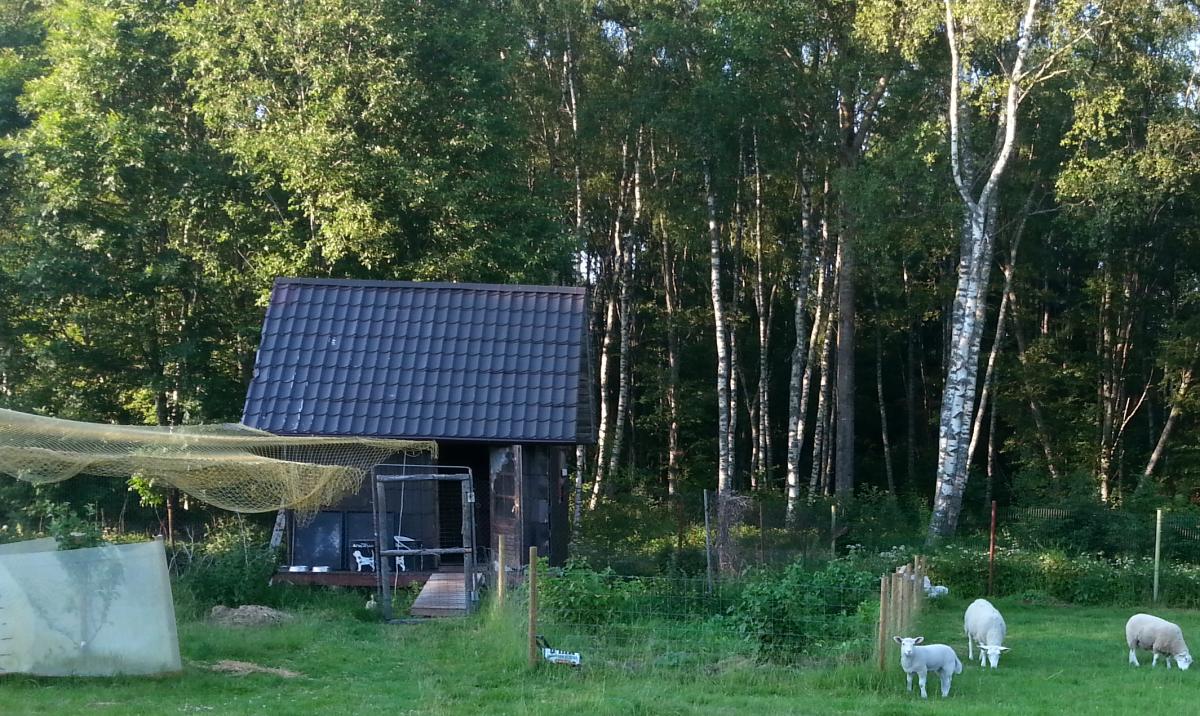 The bedding we use for ducks (peat mixed with their manure), the plants raked from the pond and sheep manure combined, produce quite a good amount of compost. We mostly keep this in the vicinity of the duckhouse and at the far end of the separated garden of bushes and vegetables. And again, because we are lazy, we make new beds and plant new bushes as close as possible to the duckhouse, so that we wouldn’t spend too much energy on carrying the compost.

At first, we throw the bedding from the duckhouse in front of it and later we build compost piles, mixing the materials mentioned above. In the picture below, you can see young raspberry bushes and a good amount of weeds which grow really well in the compost made of the manure of ducks and sheep. 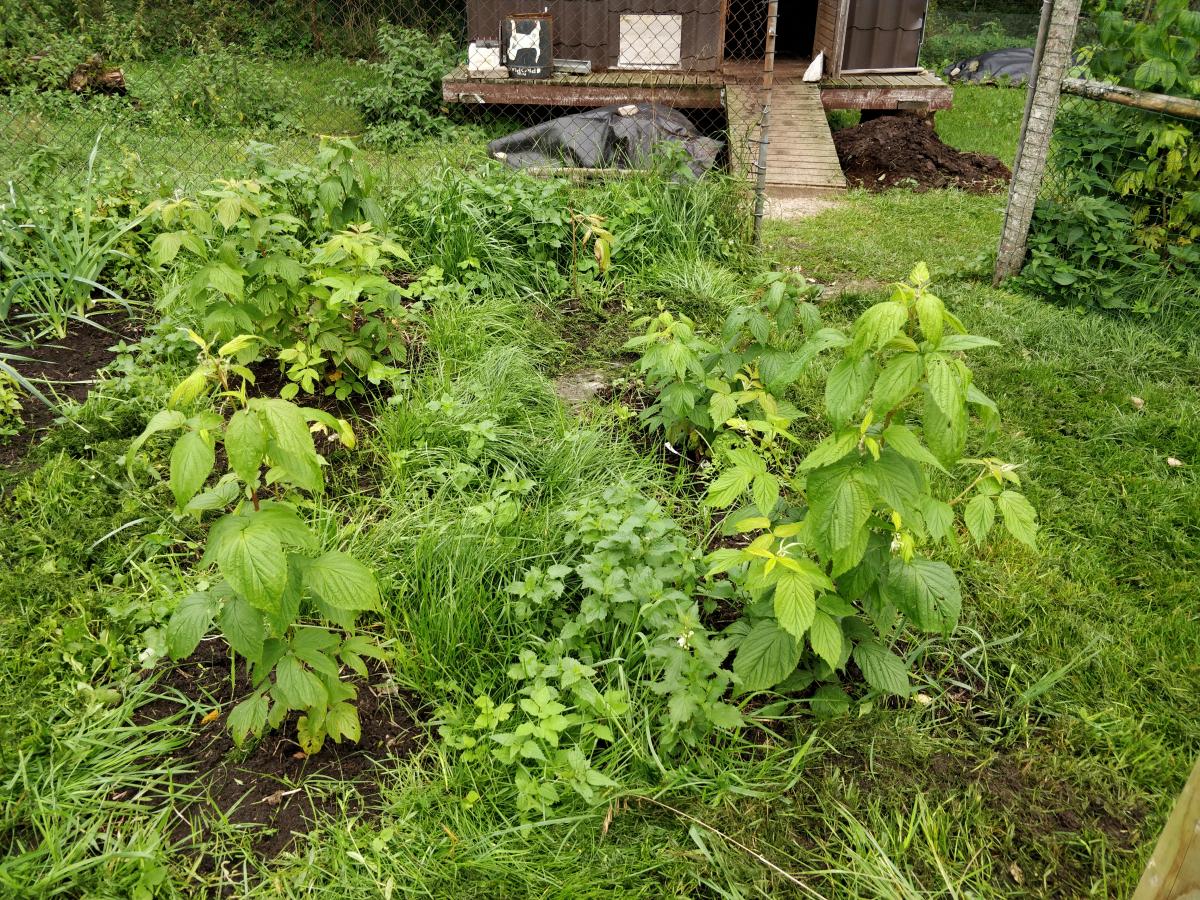 At first, I planned to use the peat used for bedding to make peat beds for cranberries and other plants that love acidic soil. However, life has shown that weeds grow extremely well in those beds as well and I really don’t feel like spending my life on picking out the weeds from between the leaves and the young branches. 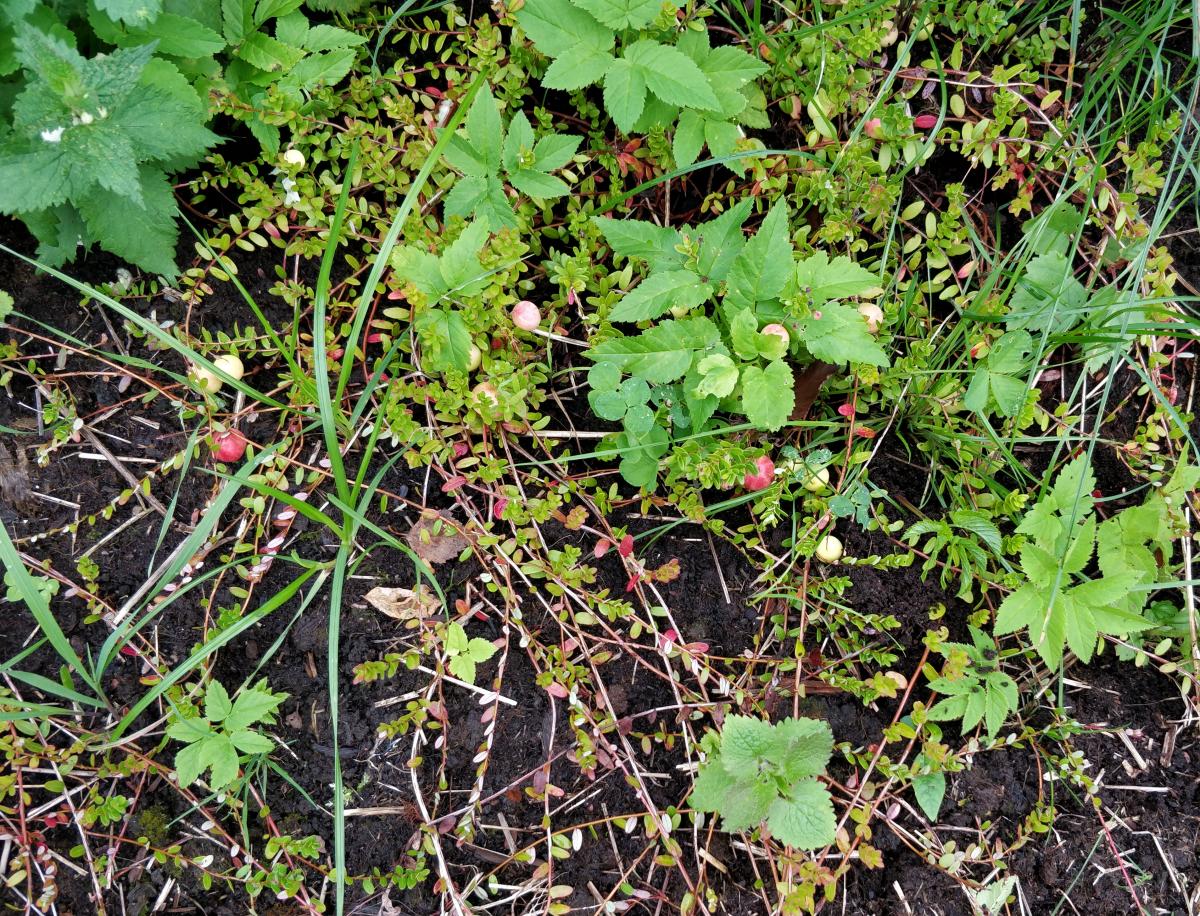 Making compost seems a lot more reasonable, and so do planting berry bushes and creating new beds for vegetables. Note that the vegetables should be planted close enough to each other so that they would not allow the weeds to grow too large.

Because expanding the wire fence turned out to be cumbersome, the bush-fruit-and-vegetable garden is now isolated from sheep by regular electric fencing. It is a lot easier to move the poles and add wiring upon need.

This summer we extended this part of the garden towards the pond, we dug some rectangular beds, filled these with soil from another part of our property and topped that up with compost. Other materials of filling such as grass turf turned upside town, sheep wool, half-decomposed hay with sheep manure etc were used, too. 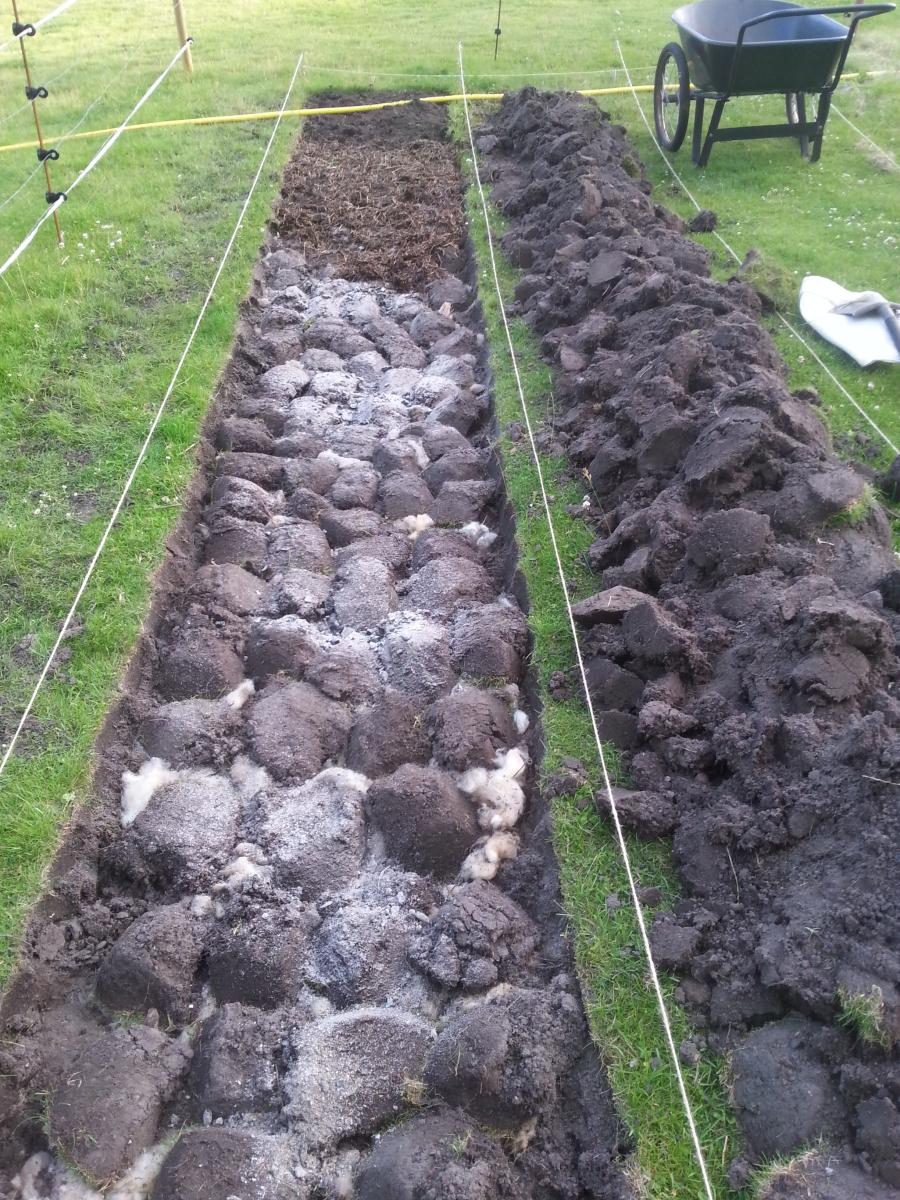 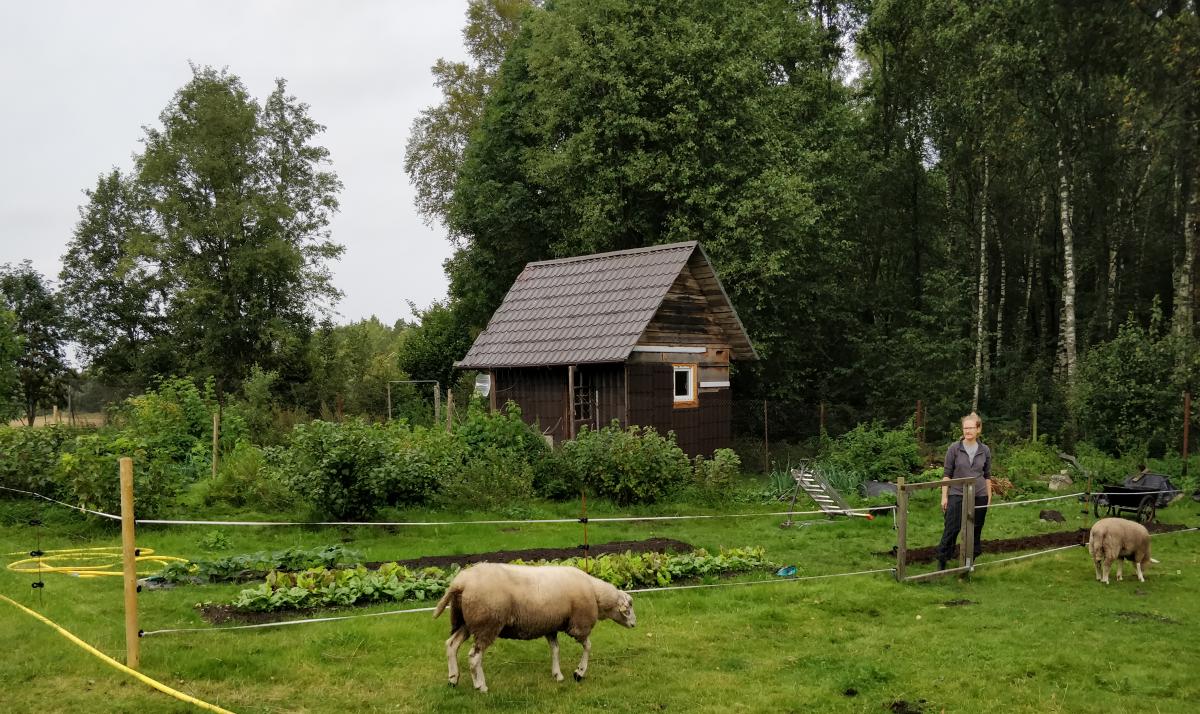 And yes, chard and spinach grow large and don’t let the nettles grow that big: 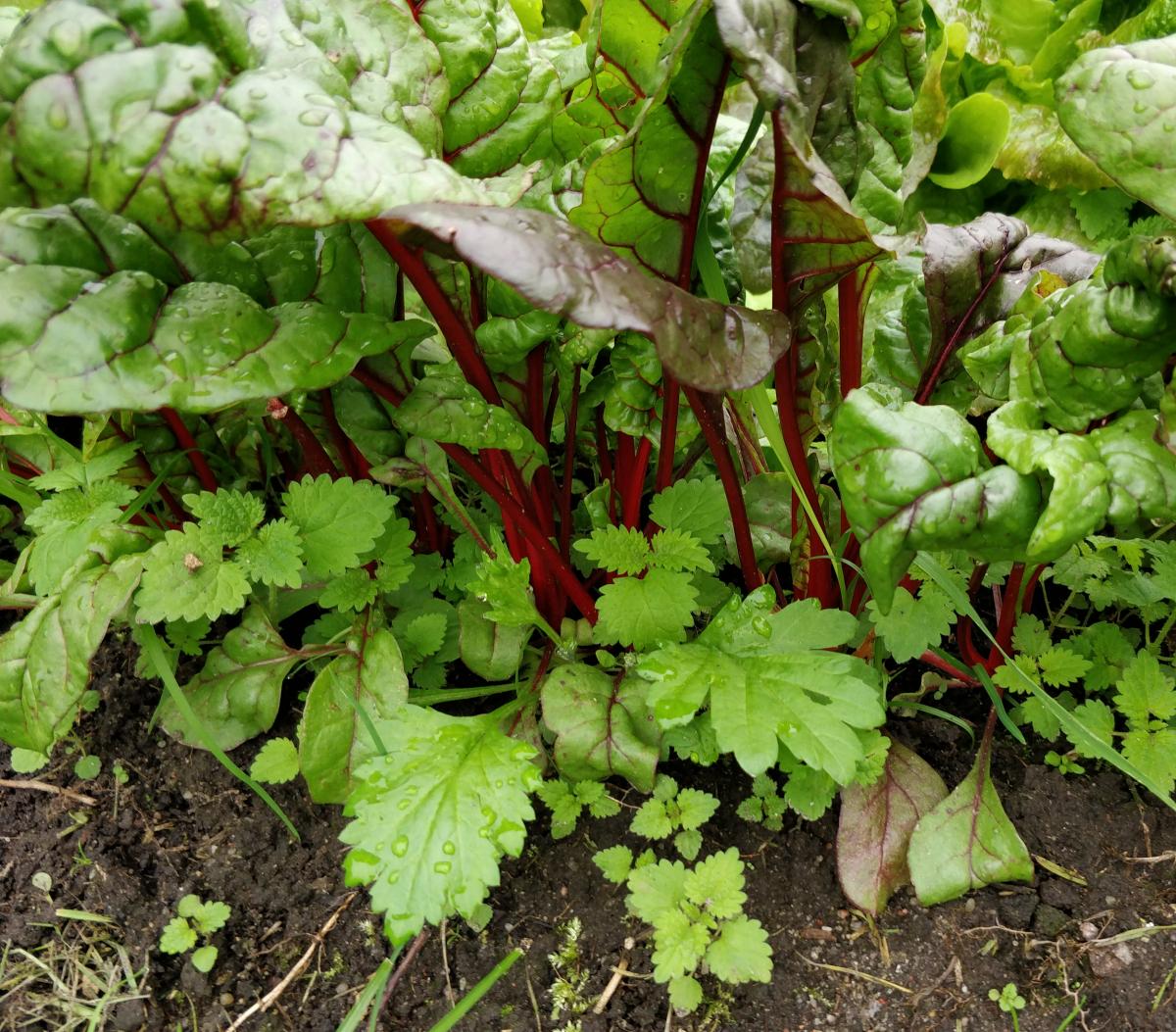 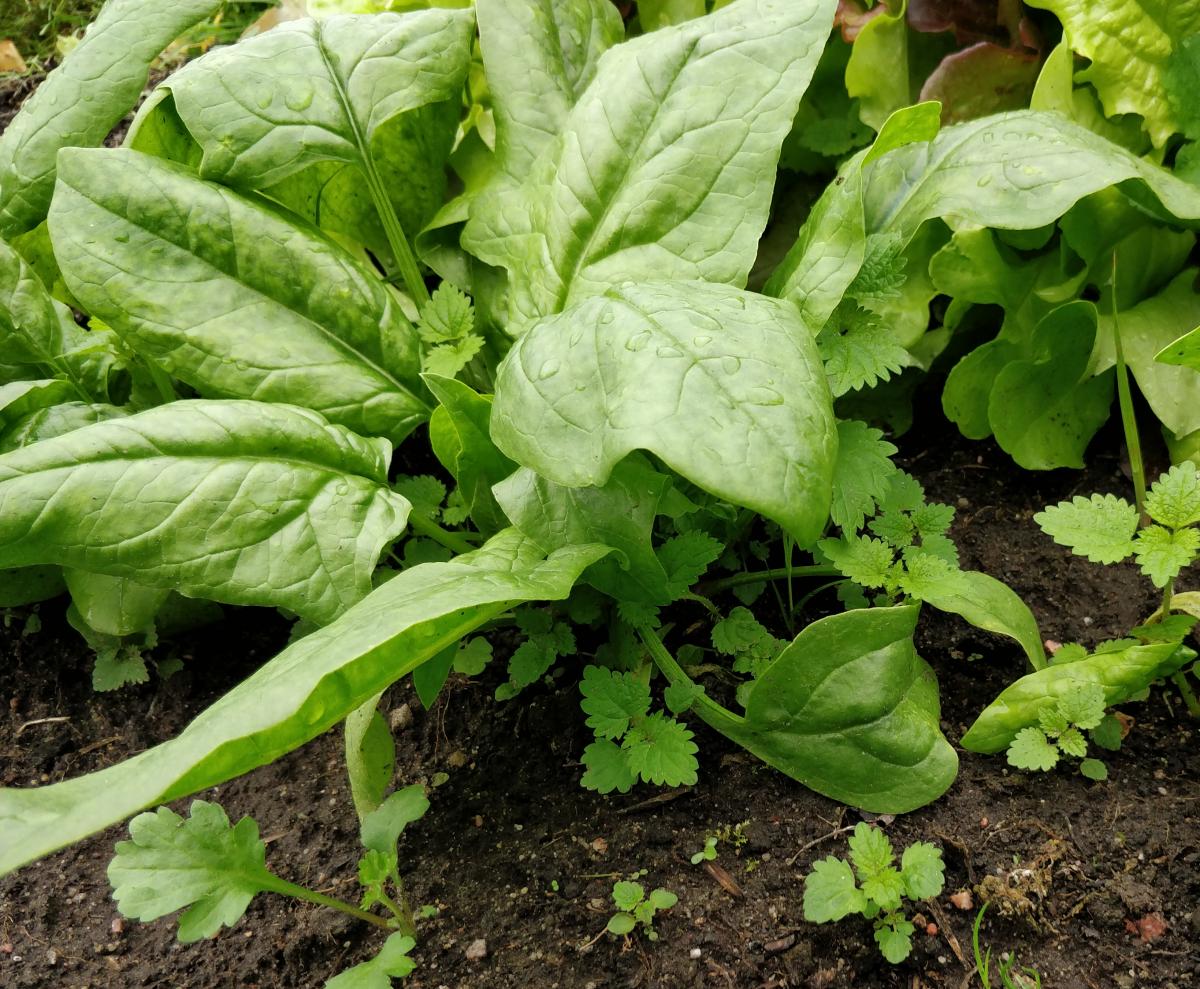 Raised Beds of Hay: Some Like Them, Some Don’t

In closing, I would like to mention an experiment with raised beds which are suggested often in the context of organic gardening and permaculture. These are raised beds of hay or straw, which haven’t worked too well for us.

In the course of winter, quite an amount of hay used as the bedding for sheep accumulates in our garden. This spring we piled the hay into raised beds, to try and grow herbs and strawberries. When you look at the site from some distance, it looks quite convincing: 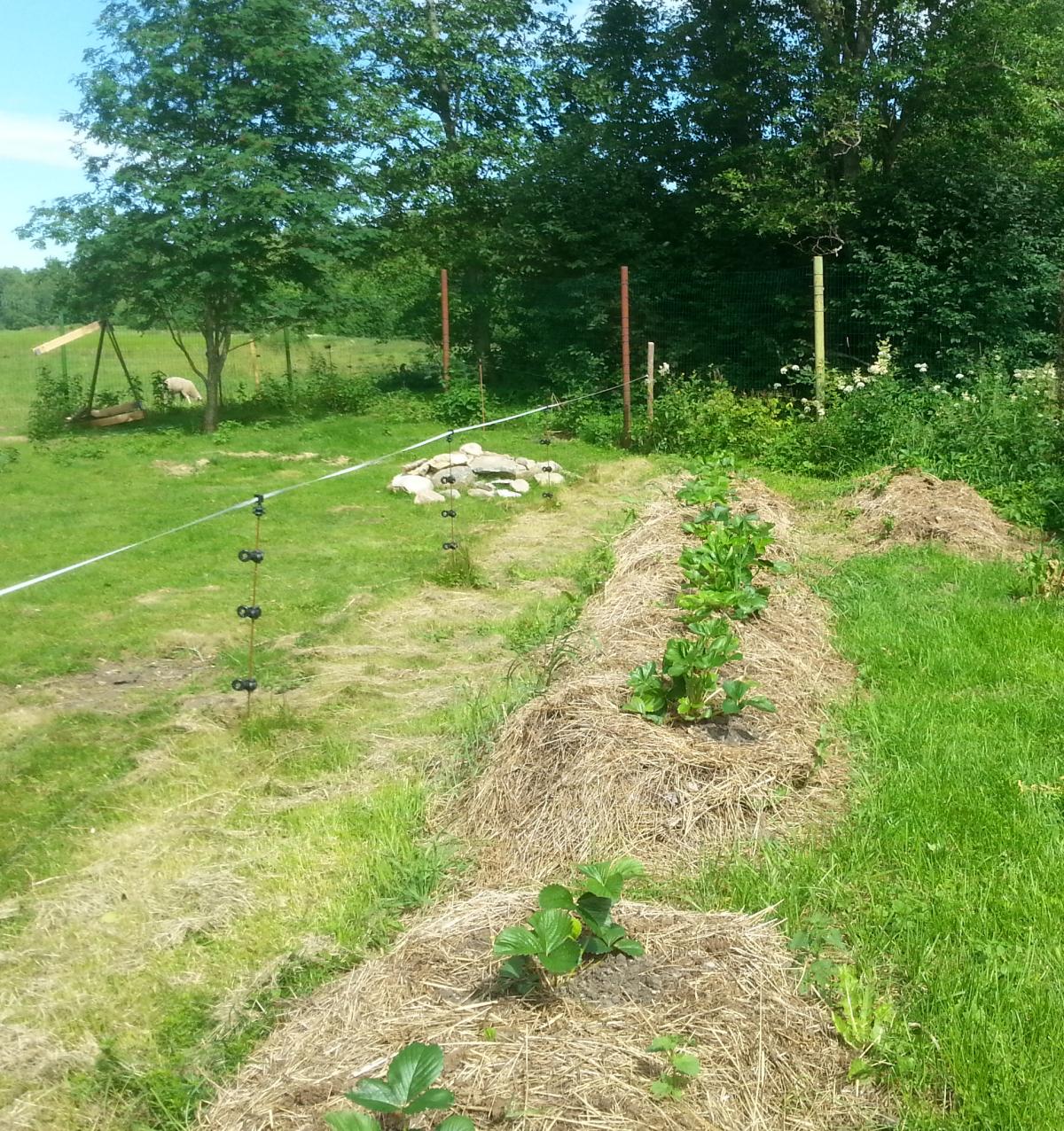 In reality, the beds tended to fall apart and in addition to that, some creatures found the beds a great place for living in, and literally turned part of it upside down. Here is a picture of a planting container made of peat, which has been pushed out of the bed: 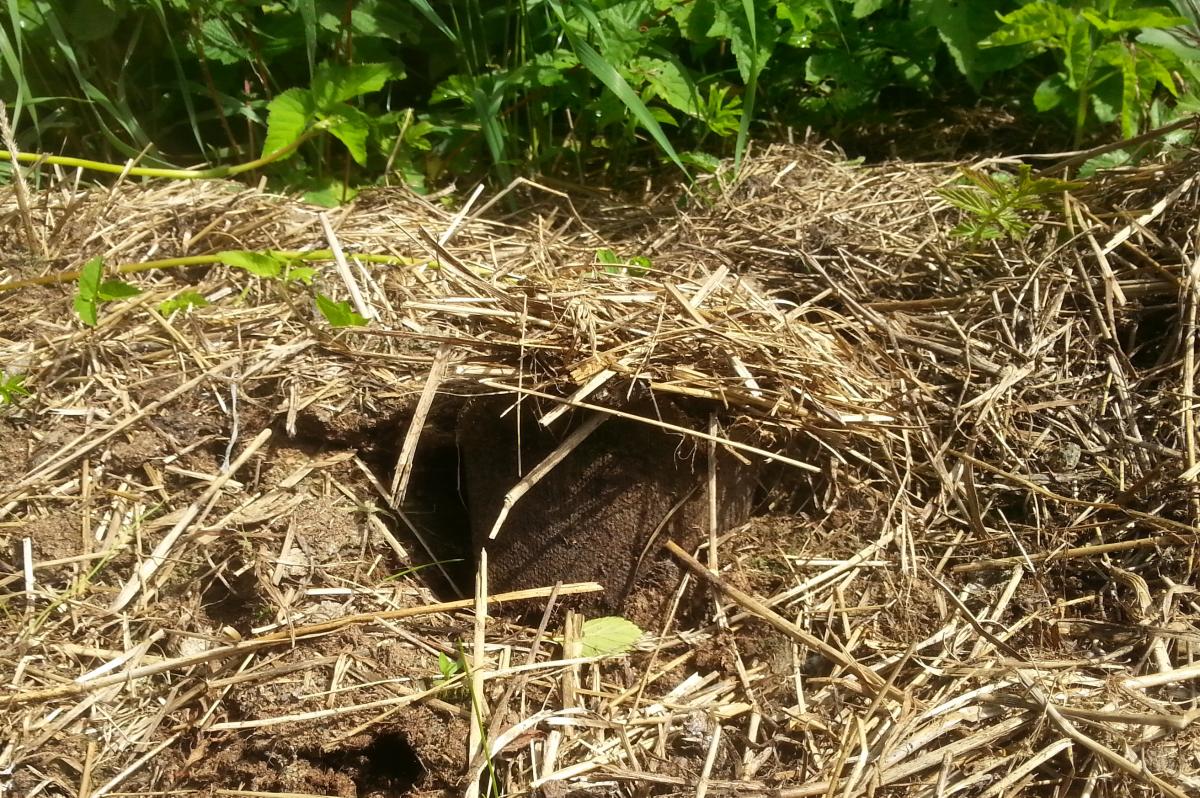 And in this picture, the reader may find one possible offender (and I don’t mean the basil plant). 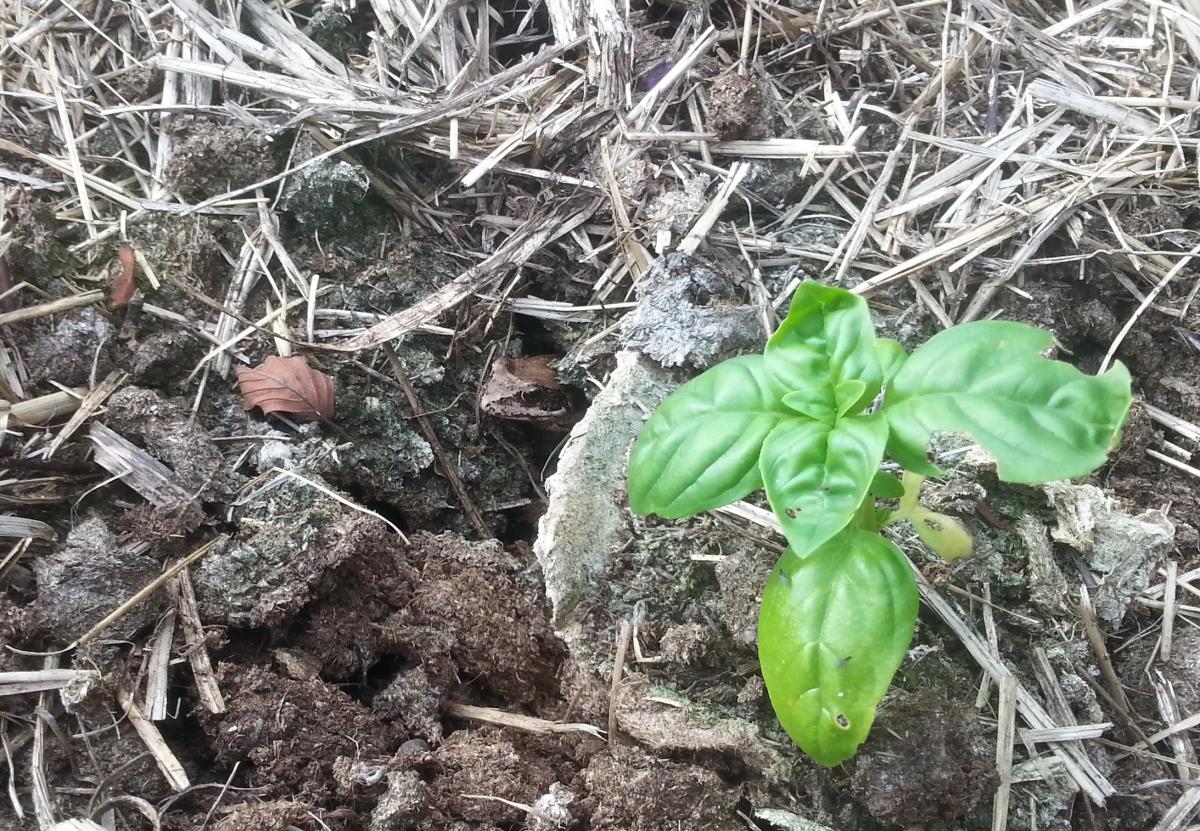 In addition to frogs, the cold weather we had in the beginning of this summer, also did harm to the basil plants. Looking forward to the lessons of next year.