Many of you will know that ducks love water a lot – they may endlessly play in the water, be the body of water a large pond, a small bath or a drinking bowl in the duckhouse. Water activates sex drive in ducks, too, and having sex in or near water and washing themselves after the act, are natural parts of their sex lives.

One thing is to love playing in water, but water is plain necessary for ducks, too, to wash their beaks and eyes. Alongside other advice typically given to beginner duck raisers, is the suggestion to keep available a bucket of water where ducks could plunge their heads.

From the standpoint of hygiene, the housing conditions of animals and birds should be kept clean and dry, so that a moist and dirty environment wouldn’t encourage all kinds of diseases to develop and spread. In addition, we would like the eggs laid by birds to be suitable for consumption without having to be washed – to keep their shelf-life to the standard.

A Contrast between Hygiene and Pleasure

In the following picture, a dutiful duck-keeper has cleaned up the duckhouse. The trays around the water bowl have been washed, so has the water bowl, and there is a clean layer of peat on the floor for bedding. 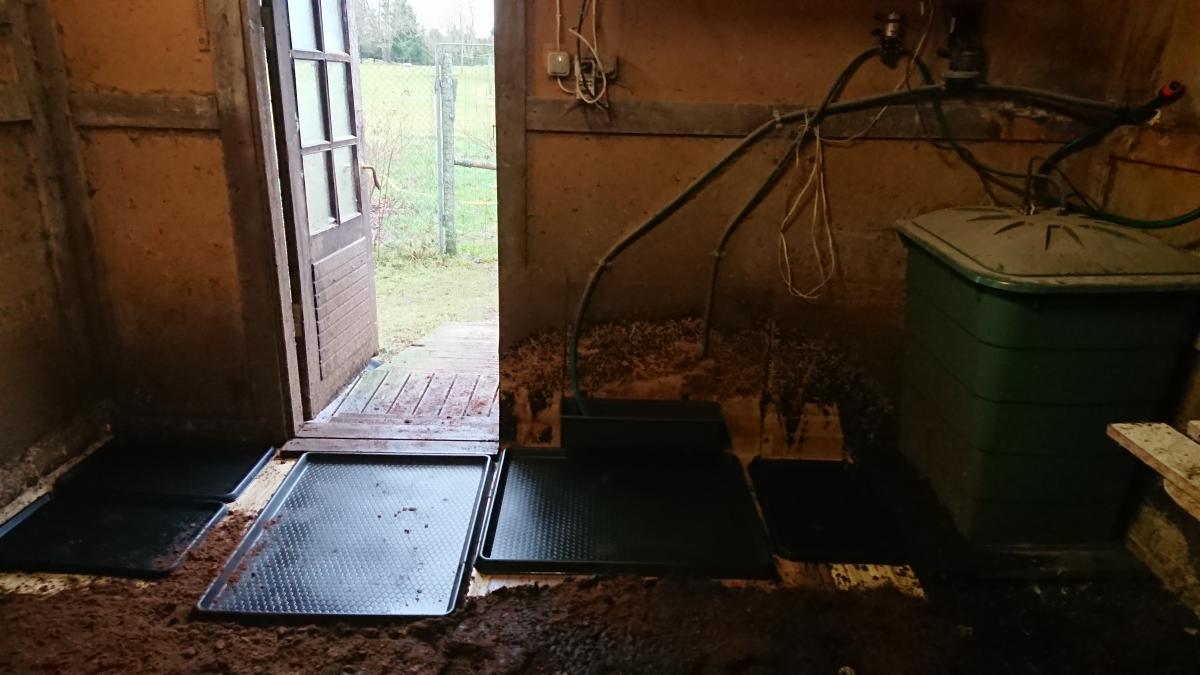 Now let’s look at how ducks typically play with fresh drinking water (the video was filmed in early spring, so the low angle of the sun spoils the quality of the video).

Clearly what we see here is pure pleasure, far from the basic needs to clean oneself or have a drink with one’s feed. In general I like to provide my birds and animals with conditions they enjoy, and our automated water supply helps with this, but …

In the autumn of the year that just ended, I thought about the topic and realized I would have to draw a line somewhere, because cleaning the duckhouse is quite inconvenient in the winter. We do have year-round water supply in the duckhouse theoretically, which helps us wash the trays using a hose, but with heavy frosts this might not work. At the same time, our ducks stay inside the house a lot and they produce a lot of manure. And of course they spill lots of water on top of all this at every opportunity, and then they dig around in the mud pit they have created. What hygiene!

I decided to configure the automated water supply so that the drinking bowl of the ducks would be filled with fresh water only in the evenings, a little before I typically go and feed them. I hoped that if I skipped providing fresh water in the mornings, the birds would be calmer and there would be a lot less of water mixed with peat, to carry out. Let them live without water for half a day – their basic needs have been fulfilled!

The result is surprisingly good. During the times when the drinking bowl was filled twice a day, the situation looked as depicted in the following picture, by each evening. Now, the situation becomes close to this by the 5th day but if I add dry peat on the floor each day, the peat manages to suck in the water. 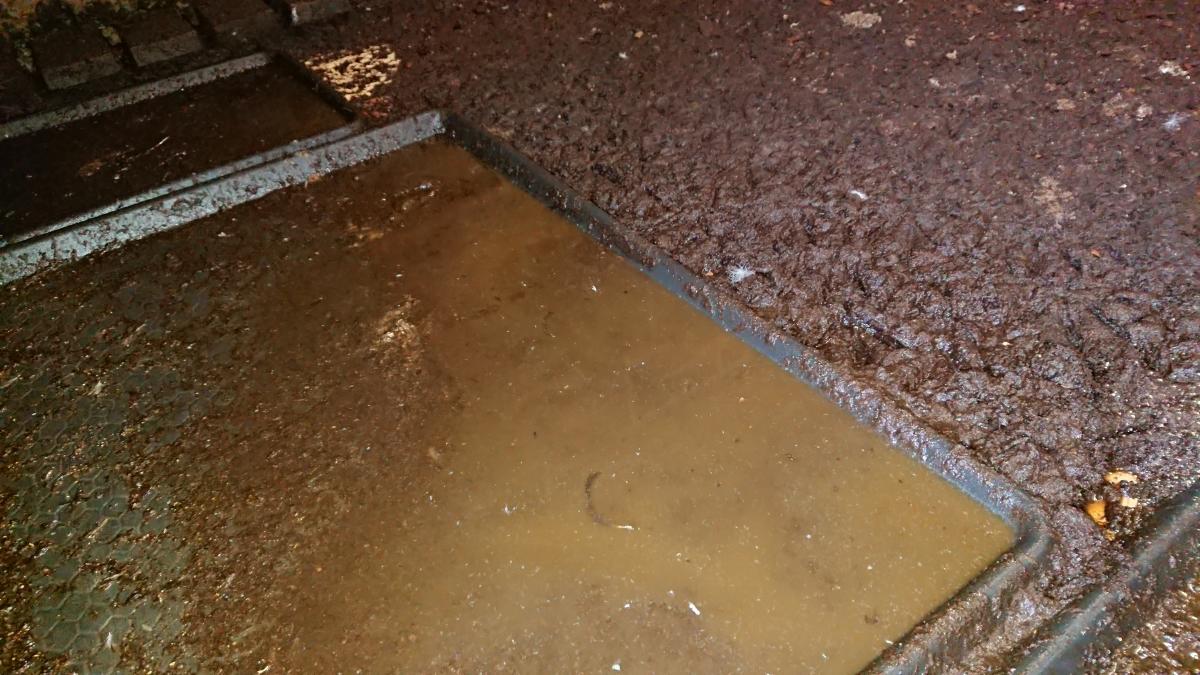 Once the amount of water on the trays is small enough so that the peat sucks it in, it’s quite convenient to throw it out of the duckhouse with a suitable shovel. 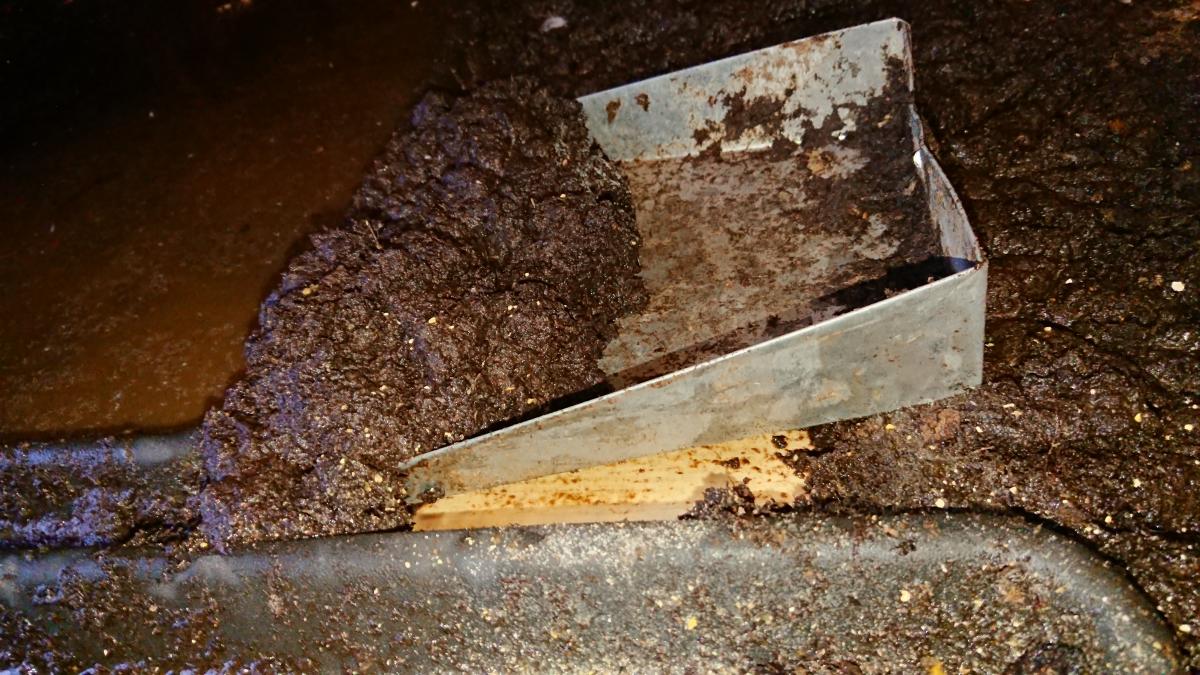 On the other hand, if the amount of water is so large it fills the whole tray, you will need some sort of a pump to get rid of it, or you will have to carry the filled tray out of the house, typically spilling half of the water back on the floor.

I will finish this post with a cool analogy. There is a philosophy called lean farming, the followers of which aim to approach small-scale farming in a way that would increase productivity, profits and effectiveness while constantly trying to throw out “trash” from the process, trash meaning all the unnecessary activities. All of that trash is called “muda” in Japanese (the theory originates in Toyota car industry, Japan), and in Estonian, “muda” is the word for “mud”. In the context of this post, we are dealing with removing “muda” both directly as well as by that theory. By optimizing the procedure of providing our ducks with water, I removed lots of “muda” from the process that involves throwing out a lot of mud!