How do you provide your sheep with comfortable conditions and when is the weather nice for bicycle traveling when the seasons are becoming quite unpredictable? This post was inspired by the bad situation of the wool of our sheep that I discovered today, and in my mind it somehow connected with long distance bike travellers experiencing unpredictable weather.

From time to time, we have guests through the Warmshowers portal. These guests are long-distance bicycle travelers. One of them, Paolo from Italy, stayed for a couple of nights last year in the middle of May, as he wasn’t really prepared for snow. For Estonians, this picture doesn’t really look like “imprisoned by snow”, it was more like a bit of some white-colored precipitation in the morning which was gone by the evening. But we weren’t travelling by bike anyway. 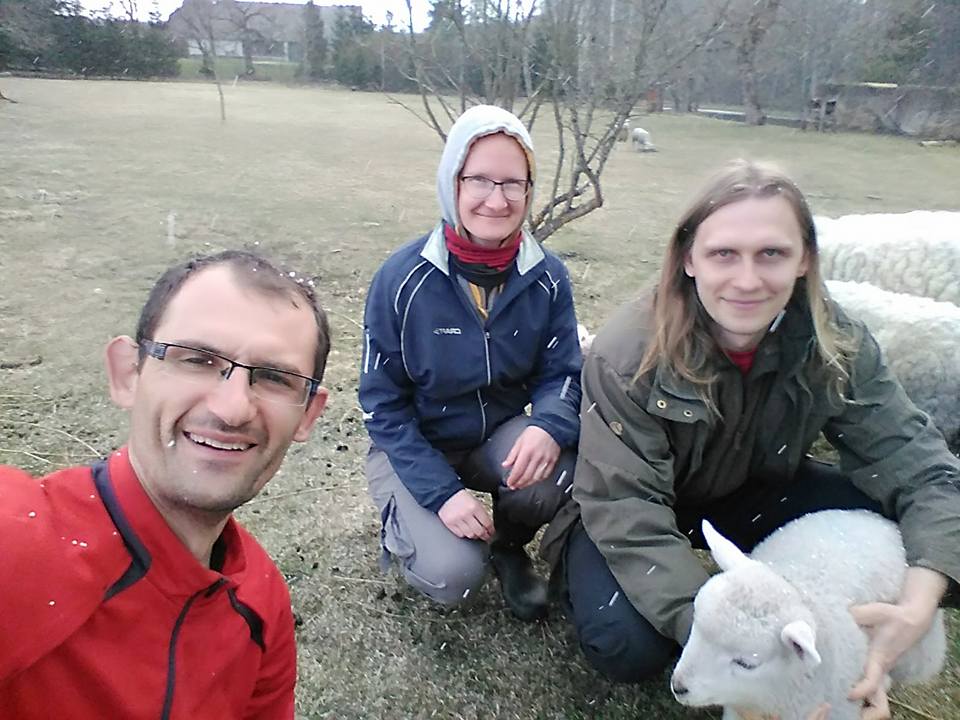 One Brazilian guy who visited us during his journey, quit his foot hike on the RMK path after a couple of days, because of snow in the middle of May.

Our lambs were born in the end of March last year and we had planned the births so that the cold and snow would be generally gone. However, in the end of April, the lambs could experience snow and temperatures below zero. 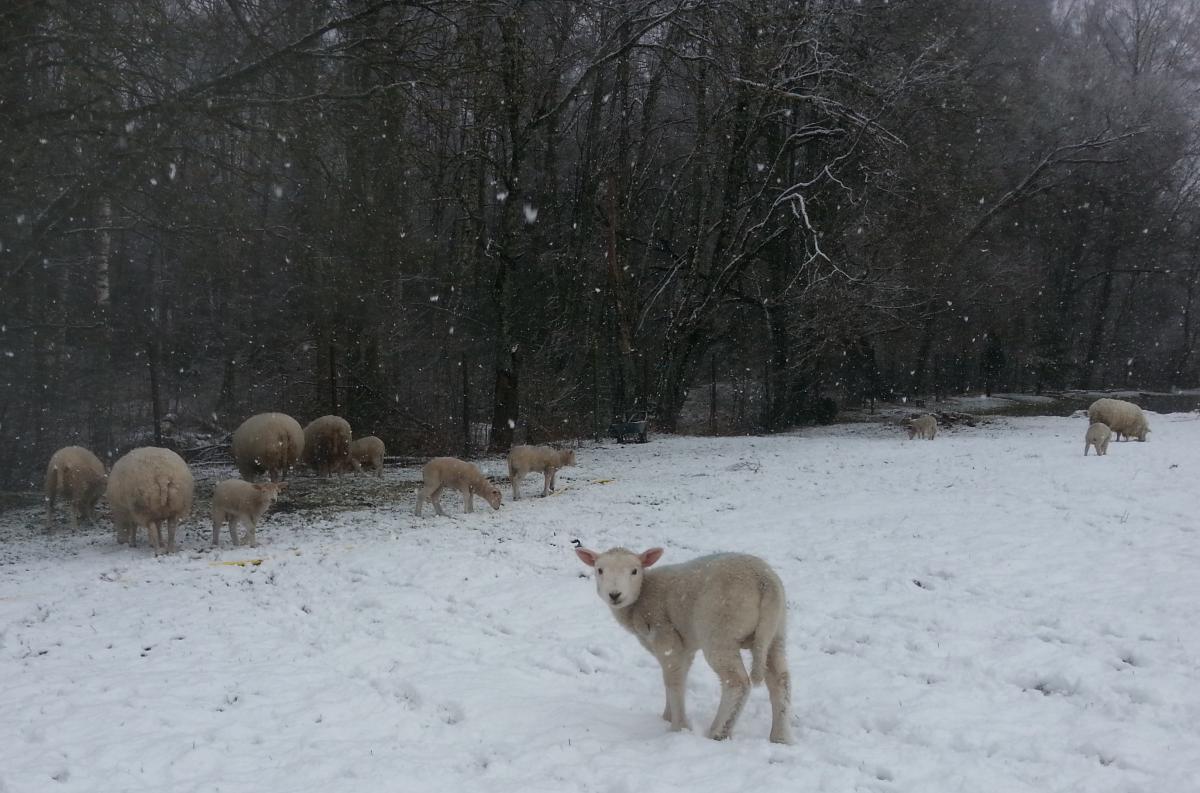 Last week, I received a message from a guy from Australia in Warmshowers. He asked when the weather would be nice for a bike trip in our region. What can I say? If you are OK with the cold and the snow in late spring, you will do fine, but if you are used to a warmer climate, don’t hope for stable warmth before June? When I say “warm” I mean “above zero Celsius at daytime” .-) We have had nights below zero Celsius on Midsummer Day lately.

We spent our last two New Year’s Eves in the hot tub near the pond while it was above or around zero Celsius outside. But it has been cold and snowy in October.

When Your Least Friendly Sheep Comes for a Scratch, Your Flock Has a Skin Problem!

Back to sheep. Our sheep live outside year-round and we usually shear them in April or May, depending on our possibilities and skills. They are used to close contact with us and they are very friendly.

Now, why does a sheep really come for a scratch? Is it because she is a great friend? When we have had problems with mites in the summer, I have noticed that even those ewes that are not too friendly, approach the owner and let themselves be scratched well. Unfortunately in this way, the owner becomes the one that transmits the parasites from sheep to sheep, because all of them want to be scratched at the same time!

In the winter, the sheep have nice woollen coats. On the surface and to an untrained eye, nothing is wrong: 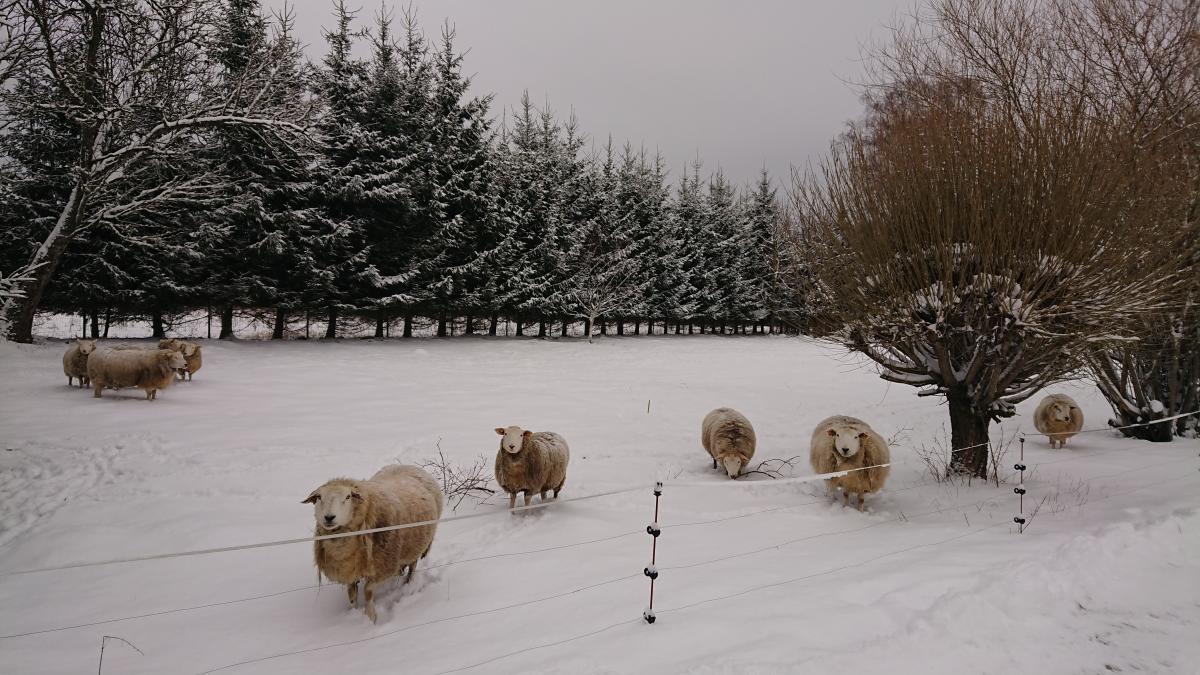 The lambs grew nice coats for themselves by the end of the year: 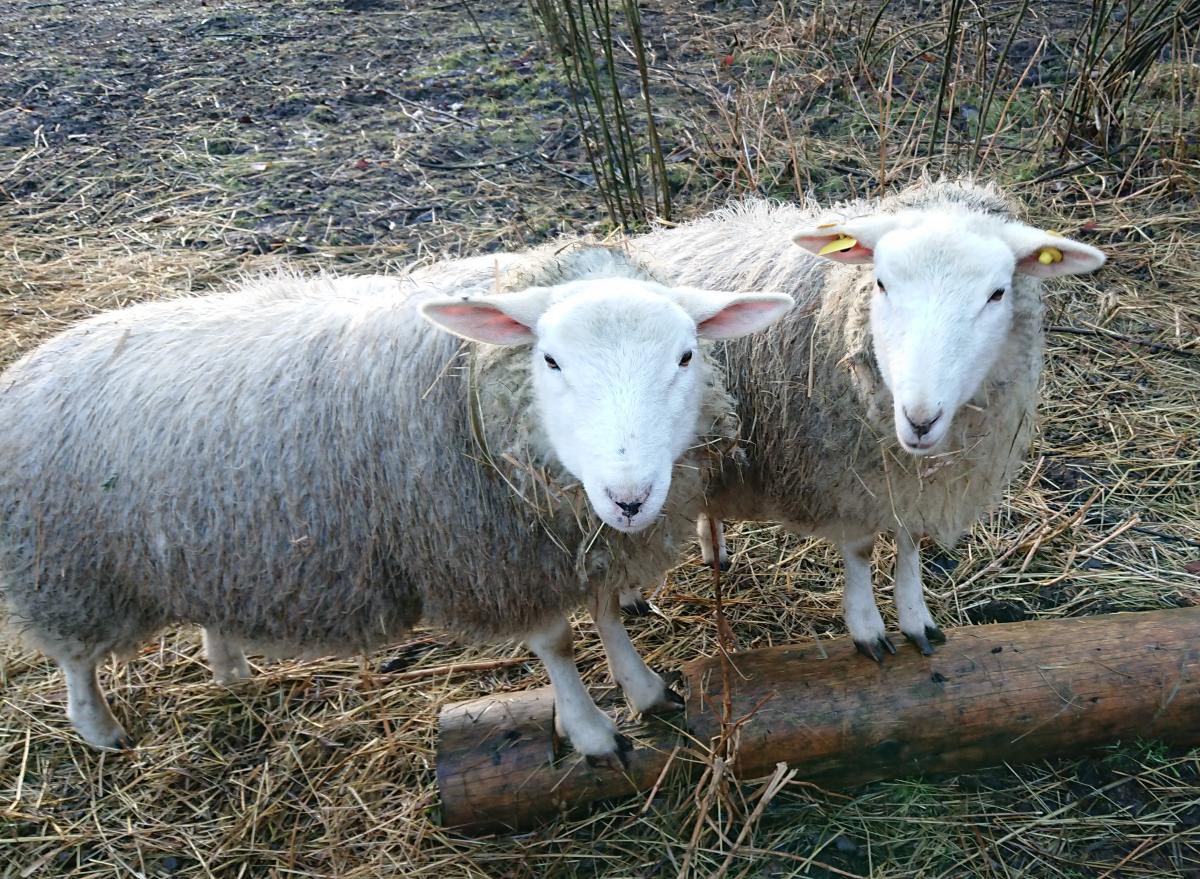 But what is going on under the coat, when rain and snow have been taking turns since autumn, when it has turned cold and warm again, continuously, until it got properly cold (below -10 Celsius) in the middle of Feburary?

The bacteria are thriving, and as a result, the wool near the skin is moist and decaying; the environment is damp and ugly. Half of our sheep have patches like this on their backs, if you separate the wool on the back a bit: 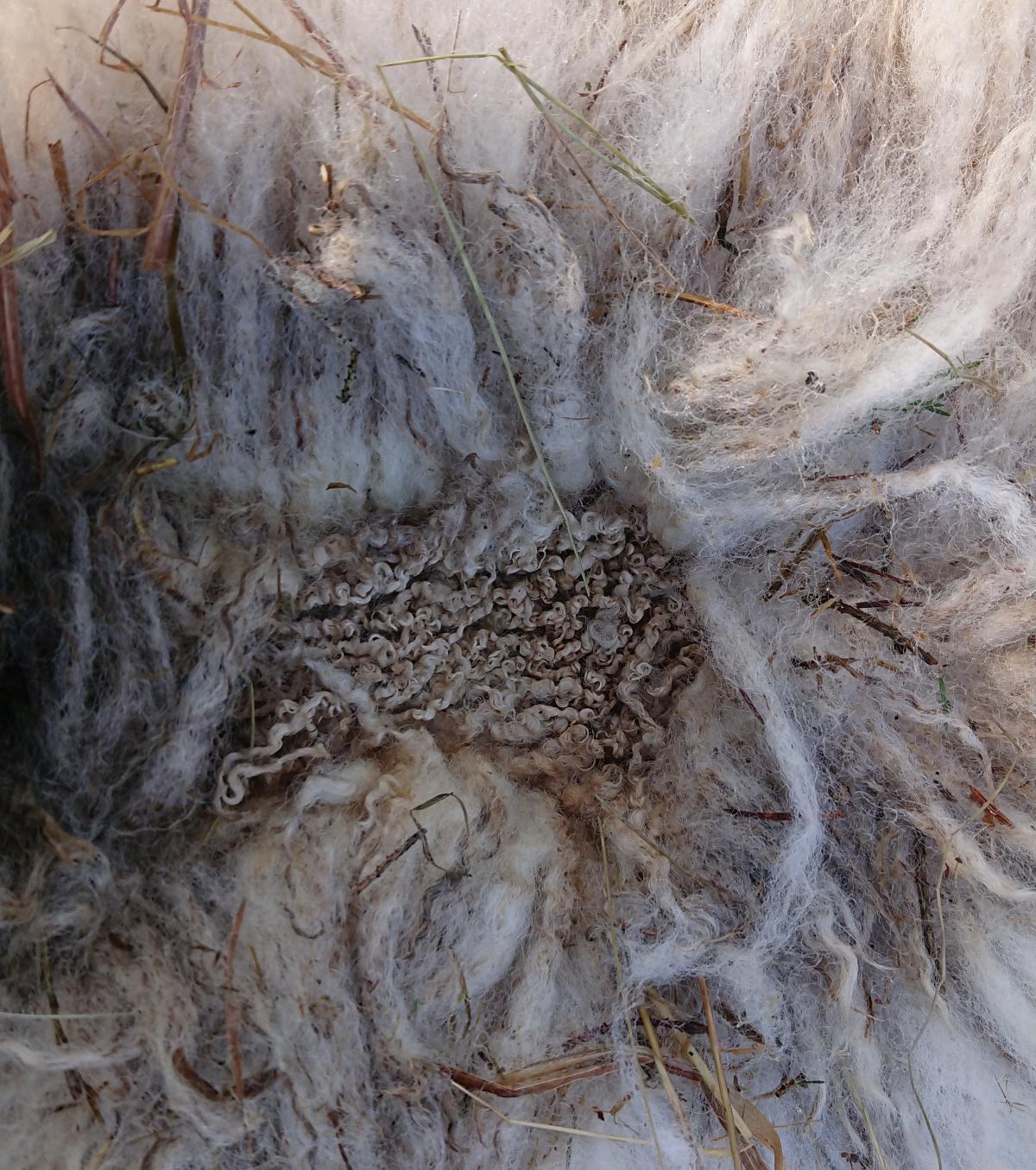 The wool can be picked off easily and looks like this: 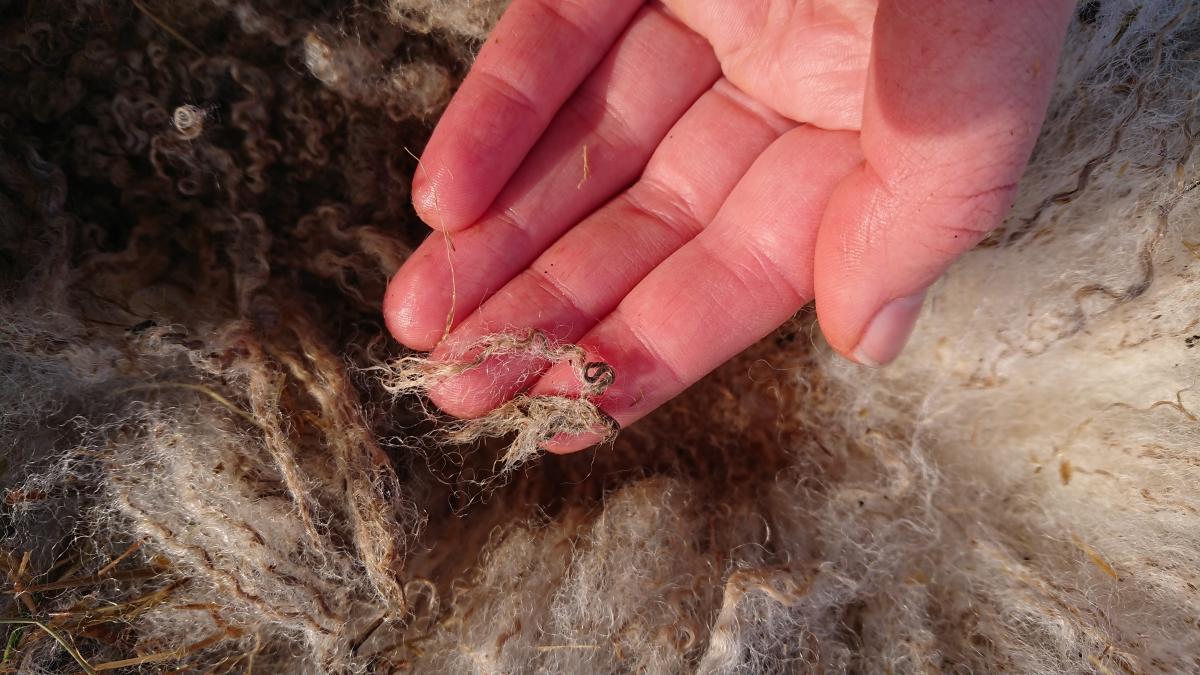 If you look at the sheep from above, you will see nothing. You will have to push the wool to the sides a bit: 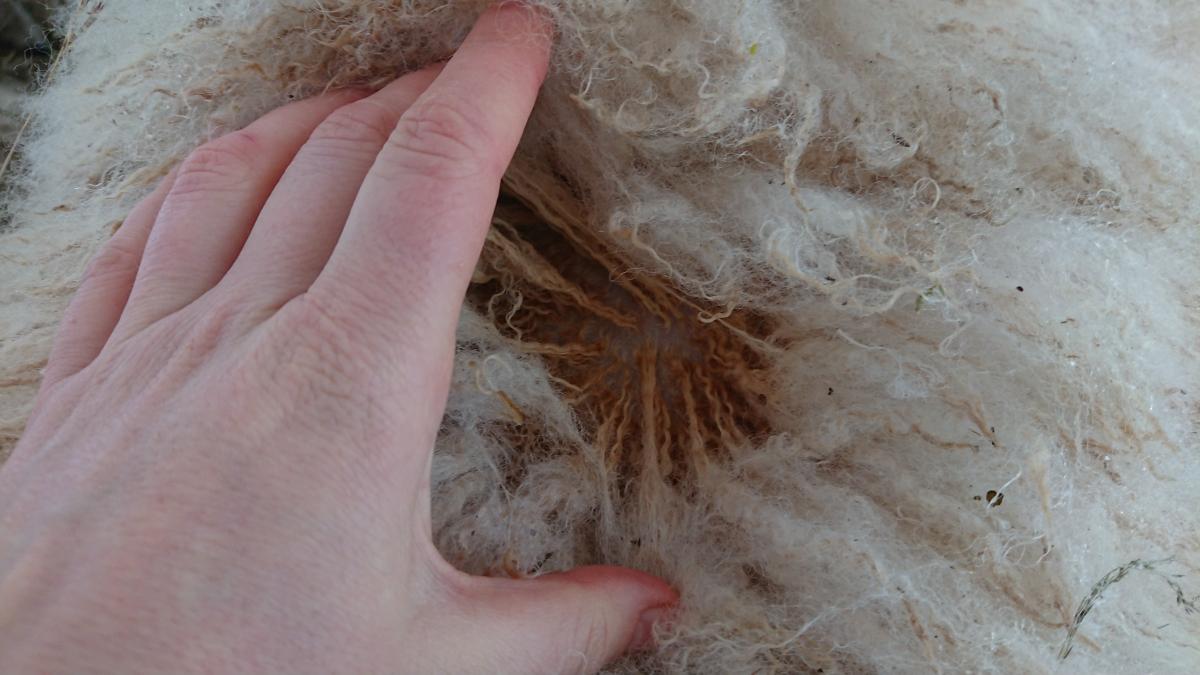 Based on literature, the bacteria are called Dermatophilus congolensis, and the condition is also called rain scald in English. And, surprise, surprise, some sources say that if you have had the mite called Psoroptes ovis around, the condition can occur with a greater probability. That’s because the skin has been damaged already (Source: The Sheep Keeper’s Veterinary Handbook). Also see the Wikipedia article.

So When Should One Shear the Sheep in a Changing Climate? And Is a Friendly Sheep a Happy Sheep?

Thinking about hugging and scratching sheep as a great way of passing on parasites, the question arises, whether making friends with sheep really is good for them. Yes for sure, spending time with sheep and touching them has a therapeutic effect on the owner…

And when should we shear the sheep, to provide them with maximum well being?

We could shear them in September, but if the temperature drops to -10 Celsius in October and it’s snowy and windy for some time, the sheep will be cold. They will need more food, and suddenly. You should change the feeding pattern gradually but in our experience, the cold comes suddenly in October. And goes away just as suddenly.

We could shear in April, but if the ewes have lambs and the weather turns cold suddenly, the ewes will have to get more energy from their food and they may fail to feed the lambs well enough. And again, changes in the feeding patterns of sheep should be made gradually.

At the same time, an early wave of hot weather may come in May, and if the sheep haven’t been shorn, they will feel uncomfortable.

It’s clear that from June til the end of summer we don’t want to shear our sheep because cuts and wounds can start to rot, and these will also attract flies.

It’s also clear that in its present condition, the wool of our sheep is not suitable for use, and neither is the sheepskin of any value. Or how about this excellent piece? 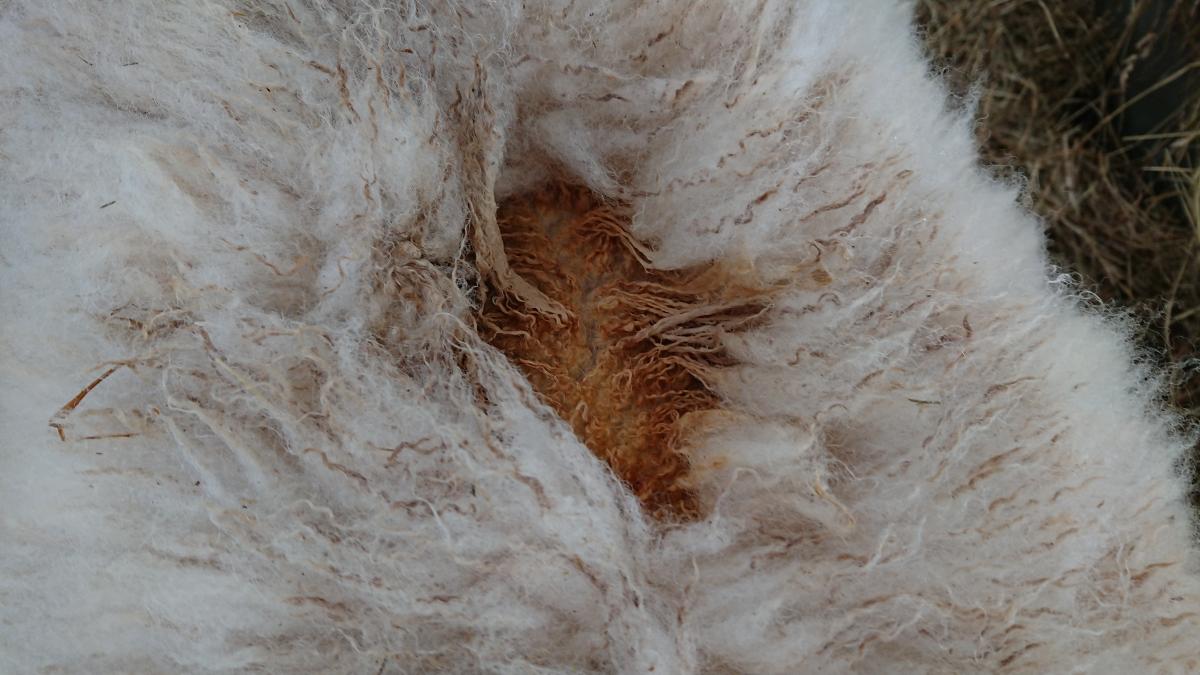 I will leave this post somewhat open-ended. With our small amount of sheep, the time of shearing doesn’t really matter, we’ll shear them in April and keep an eye on them. But I guess it’s quite a challenge for large flocks, to get used to the changing climate with lots of precipitation. Hereby I can say that the presentation (in Estonian only) held by Ann-Mari Anupõld last autumn in Toosikannu, hit the nail on the head quite a bit.

At the same time, I suggest that hobby farmers and the providers of animal therapy with farm animals, should seriously ask themselves, who is really the one that contributes most to the transmission of parasites in a humid and changing climate?