In the summer, we made an experiment with a DIY anti-mating apron.

With a small flock, one may have the need to keep a ram in the flock together with the ewes at the time when the latter start coming into estrus – but you don’t want mating to take place or you would like to plan it for a later time. We had such a need this summer, when we felt we wanted to raise our young rams to become about 6 months old, so we could perhaps sell them. Because the boys turned quite active at the age of 3 months, and because ewes can come into estrus already in the end of June, we decided to give an anti-mating apron a try.

When you search Google for “anti-mating apron for sheep”, the first results will be those from a US store called House of Bacchus Pet Supplies. They offer aprons of various sizes and colors for both rams and bucks. Also, they have a photo that displays a guy wearing an apron, in action: 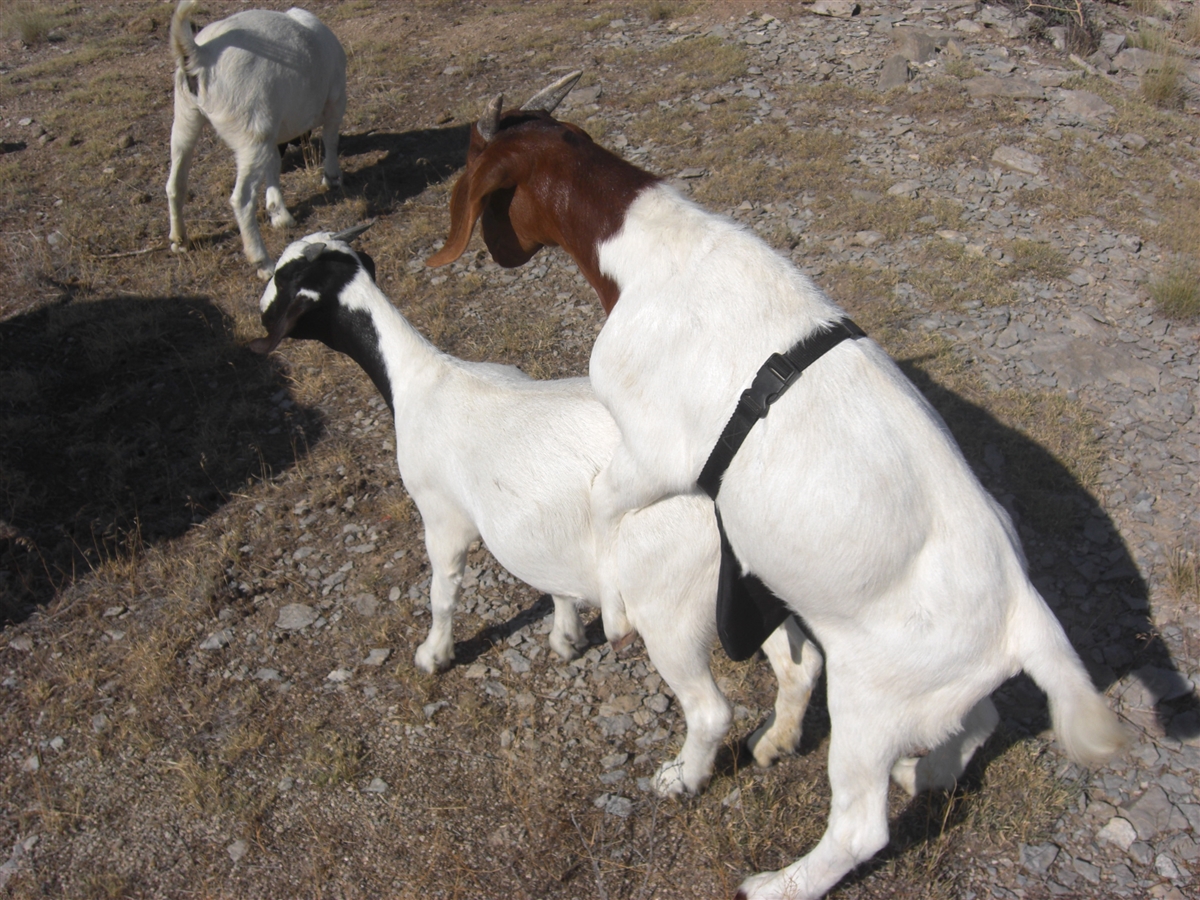 I couldn’t find any aprons with a reasonable price and shipping fee in any online stores, though. For example, Bacchus send their aprons to Estonia via ebay.co.uk, but the shipping costs would add 30 euros to the price of the apron which is about 25 euros. A shipping fee so high is quite uncommon for such small goods. Assuming we could get about 80 euros for a half-year-old crossbreed lamb, such an expense would be pointless.

So one day, it ocurred to me that a milkman’s apron, a couple of which we once bought from Scandagra, and which we both use when butchering animals, would be a great piece of raw material for an anti-mating apron. It is made of a water-repellent material and it has a neck strap with a quick-release buckle.

Here we can see an apron like this while still in its package. I was ready to make experiments for this amount of money. 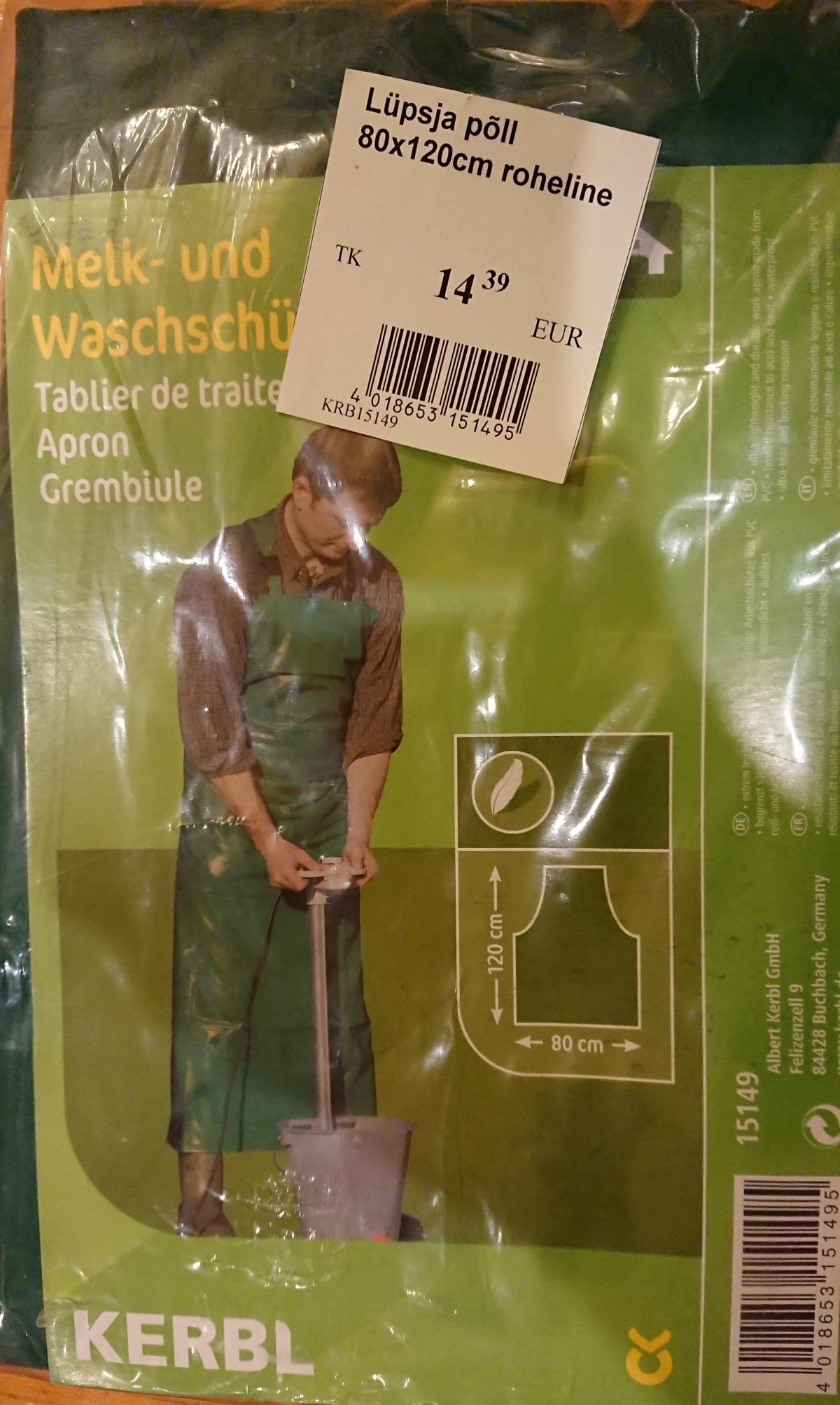 The most risky aspect about the whole thing seemed the fact that I don’t have a decent sewing machine or any really strong thread. I made the seams by hand and hoped for the best. First, the apron was worn by Tõnn, our first born lamb, whom we tried to sell when he was 3 months old, and after that it was worn by Punnsilm, whom we also tried to sell at the age of about 3-4 months. 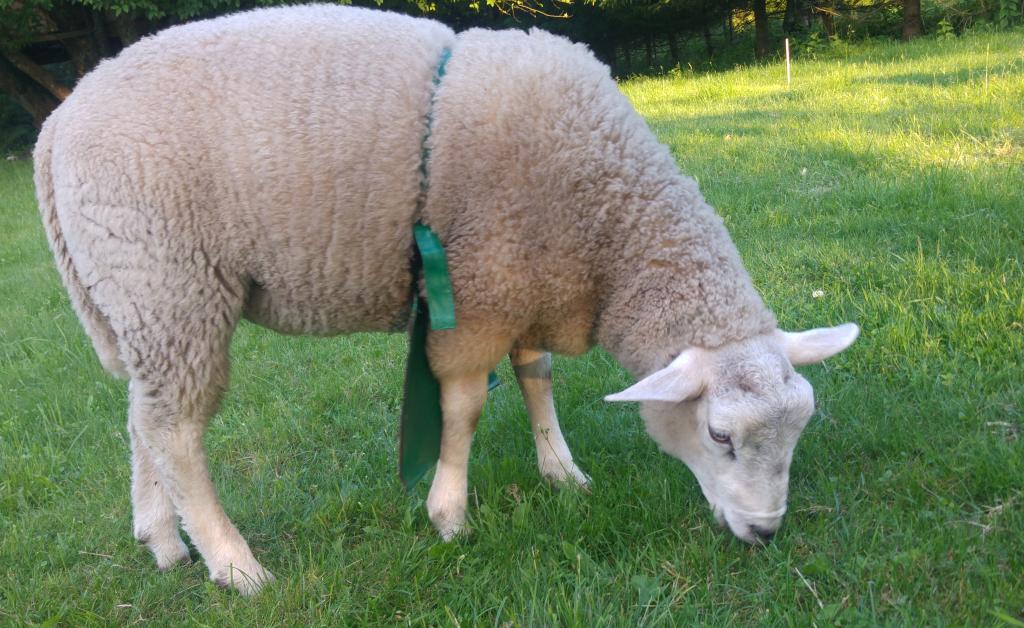 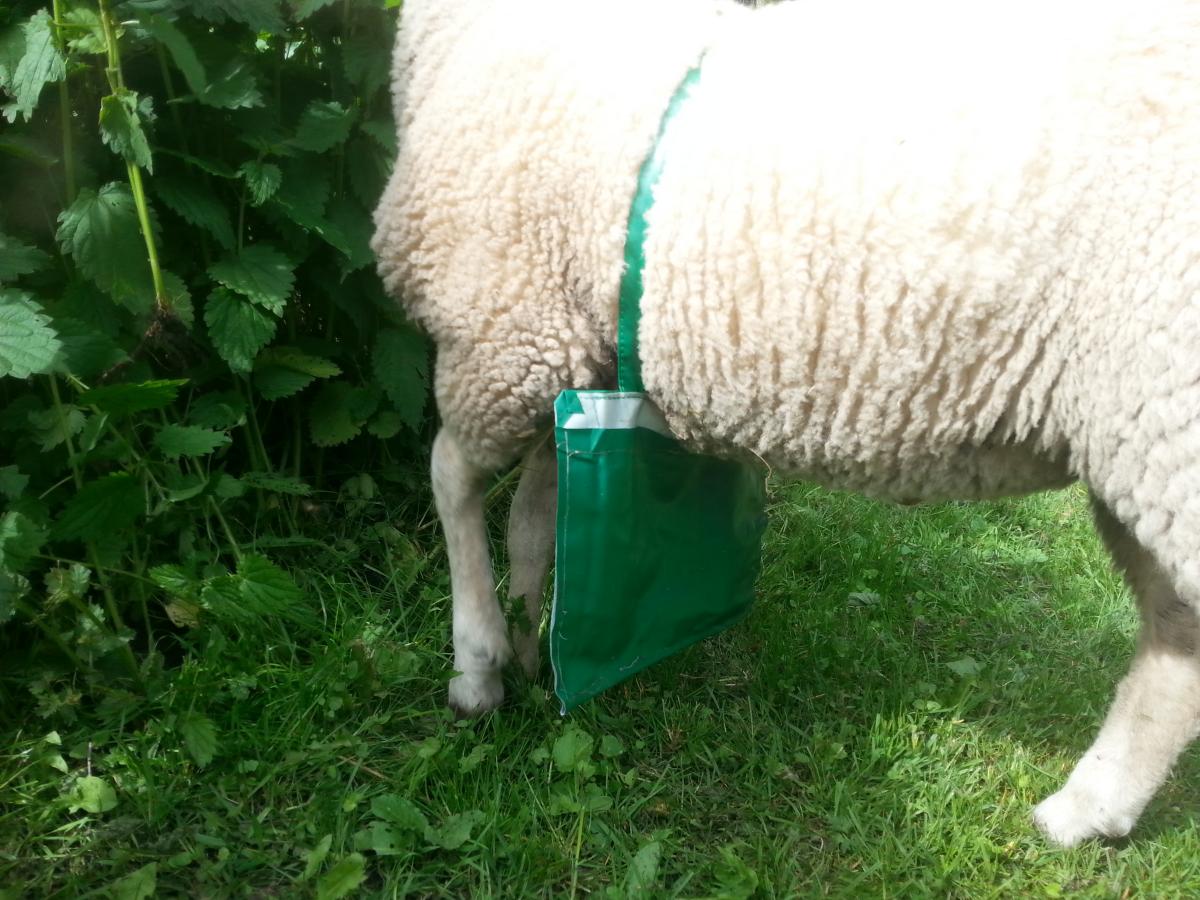 The classifieds for selling the ram lambs led to exactly one phone call. Because Punnsilm had the apron on, in the picture in the ad, the caller asked me where I had got the apron from! Well, it’s nice to share information but we failed to sell the lambs. We butchered Tõnn, and Punnsilm with two other ram lambs was castrated – now we’re not in a hurry with getting them butchered.

One problem was that the apron didn’t really last while the rams were wearing it. First, my manual seams broke down in a week, and after a couple of weeks, the industrially sewn seams of the strap broke down too. I tried to fix these with thread and glue, but with no great results.

This is what those industrial seams looked like before breaking down: 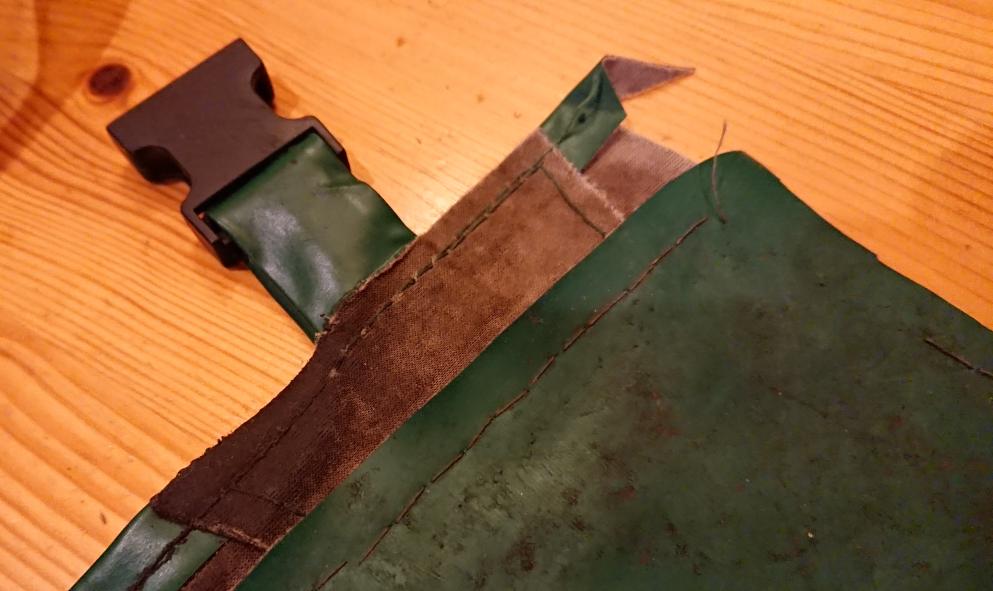 … and after having been fixed, viewed from the other side: 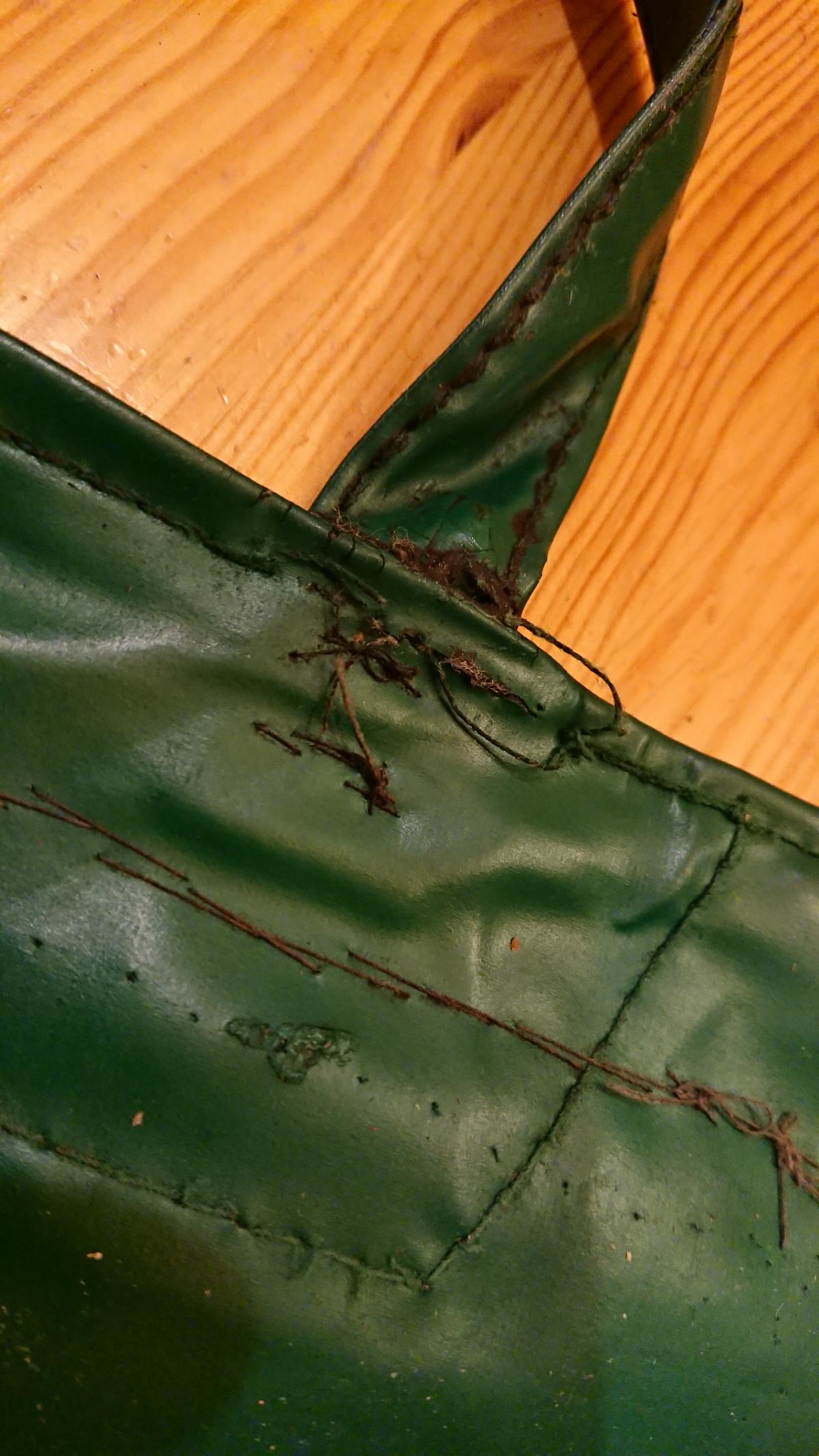 We had issues with hygiene, too. Although the material is water repellent, the apron started stinking like urine in a couple of days.

So the question is, would we have been happier with the aprons sold in the US, and do those last longer? Also, what are the optimal dimensions for an apron so that it would not be too close to the ground, but would nevertheless cover the rams’ genitals at the most critical moments?