During this spring-summer season we learned an annoying lesson related to applying ear tags to sheep. The trouble is with our yearlings (three ewes). We had postponed applying the large EU-style (Datamars) ear tags to them for a long time, in order not to spoil our friendship and cause discomfort to the animals.

Eventually, I decided to tag these sheep in May, with the help of an advisor, and among other things, learn to use the Datamars applicators. To make the task more difficult, I decided not to re-use the holes of the small ear tags applied to the sheep at the farm where they were born, but to make new holes in the centre of the ear (where they should be).

May was very hot in Estonia this year and we applied the tags in 30 degrees Celsius. We didn’t desinfecate the applicators, the tags or the ears, although this is recommended on the package of the applicators. In practice, it seems many people don’t do it though. 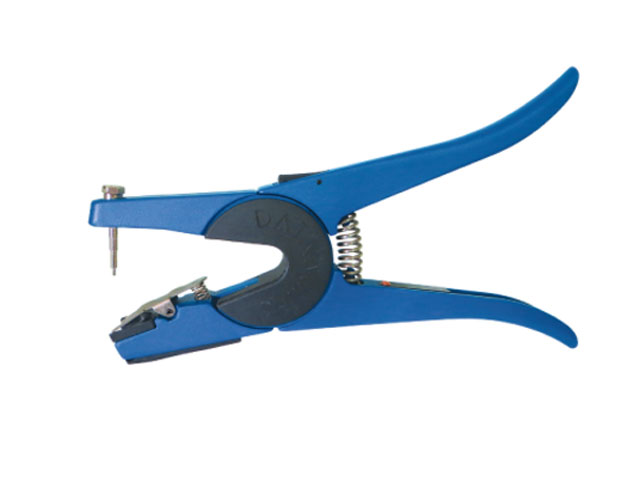 It turned out that the Datamars applicators are hard to handle at least for a women’s hand, and they tend to stick to the ear of the sheep with the tag. Of course the animal tries to break free when she feels the pain and discomfort, and this only makes the matters worse.

In the middle of June I discovered that the ears of all the three ewes were bleeding around the tag holes and flies were present, too. It was clear from observing the activities of the sheep that the wounds wouldn’t be able to heal, either. Our sheep like to scratch themselves against all kinds of walls, trees, large stones etc. Also, they scratch themselves with their hooves which are sometimes covered with manure. This sounds like a closed loop that keeps making itself worse.

Because I had no prior experience with how bad these ear tag holes may become, I called a vet. The situation was not that bad, she said, but each ewe received an anti-inflammatory injection and the vet applied Pederipra spray to the wounds – it is blue, by the way. Here is one of the ewes, called B, after treatment: 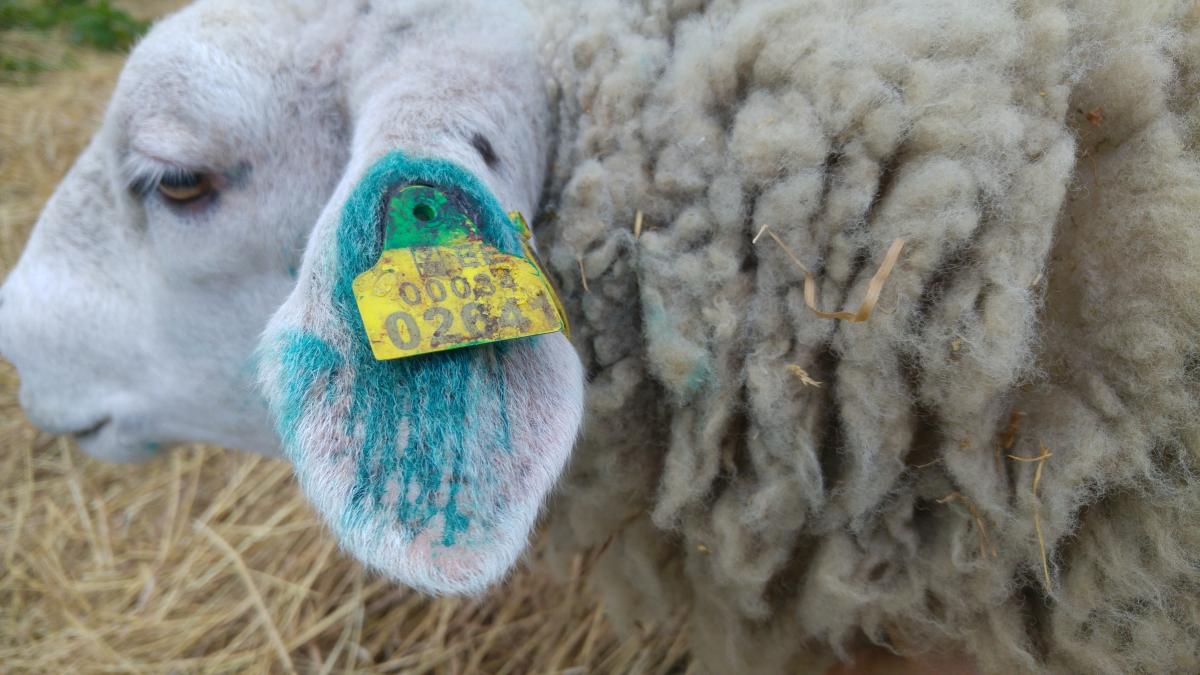 We used the blue spray for about a week and it seemed that the situation got better.

About a month later, in the middle of July I noticed that one or both ears of a couple of the ewes had not cured and instead, were bleeding again. It didn’t seem reasonable to use the blue spray again (it is an antibiotic medicine as far as I understand) so I bought a bottle of so-called wound plaster containing tar (Kruuse tar plaster), which forms a layer on the wound and should also repel flies. This spray is sold without prescription in veterinary pharmacies.

Unfortunately, no layer of medicine or other treatment stays on the ear if it is scratched all the time! Now that it is the beginning of August, we have given up treating the ears regularly and causing trouble to the sheep. We keep observing the ears and hope that when the summer ends and the flies leave, the situation will get better. Out of three ewes, two have a problem with one of their ears at the moment.

Here is B again, in the beginning of August. The area surrounding the hole gets scratched open all the time and the ear tag has turned brown with the tar spray and the blood. 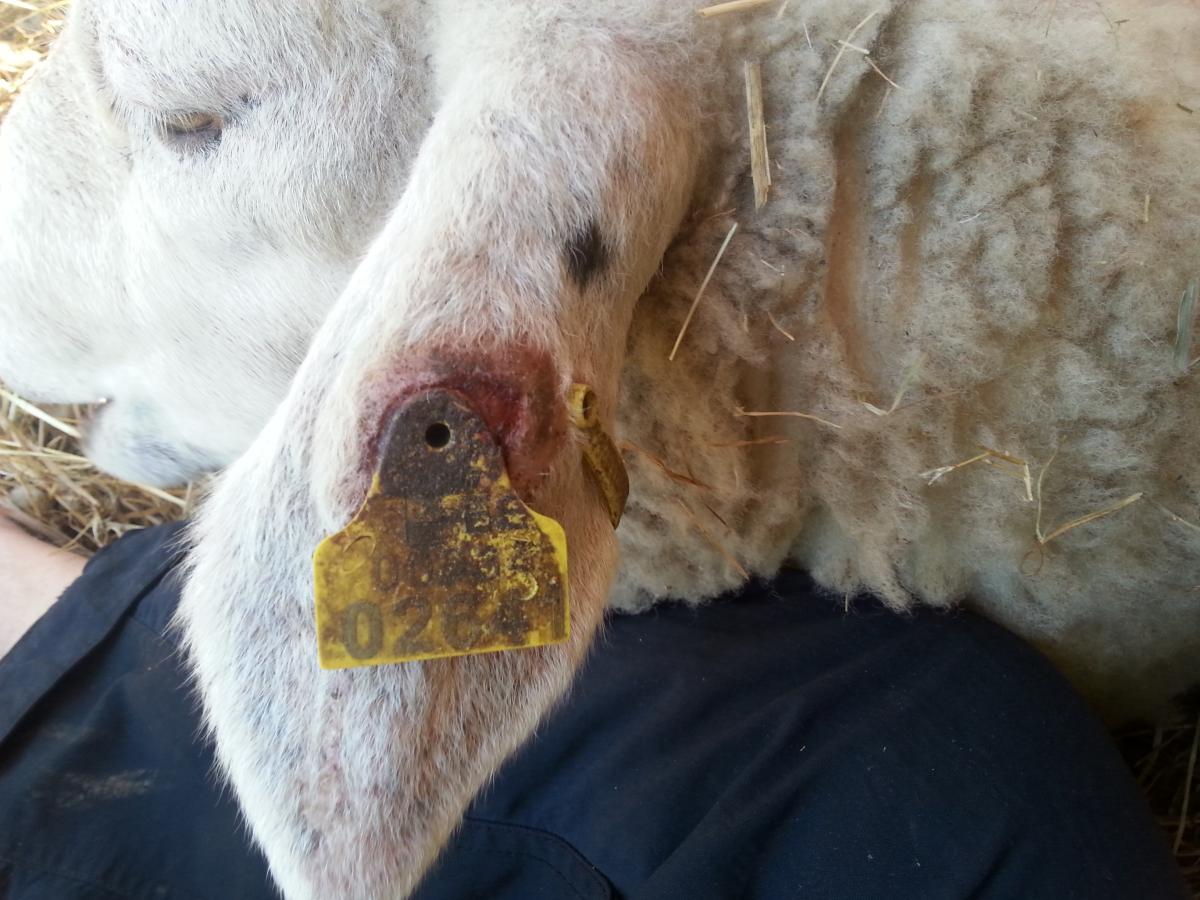 Here are photos of the ears of the ewe called K, taken in the beginning of August. The left ear has gotten OK but the right one is not really getting better or worse. 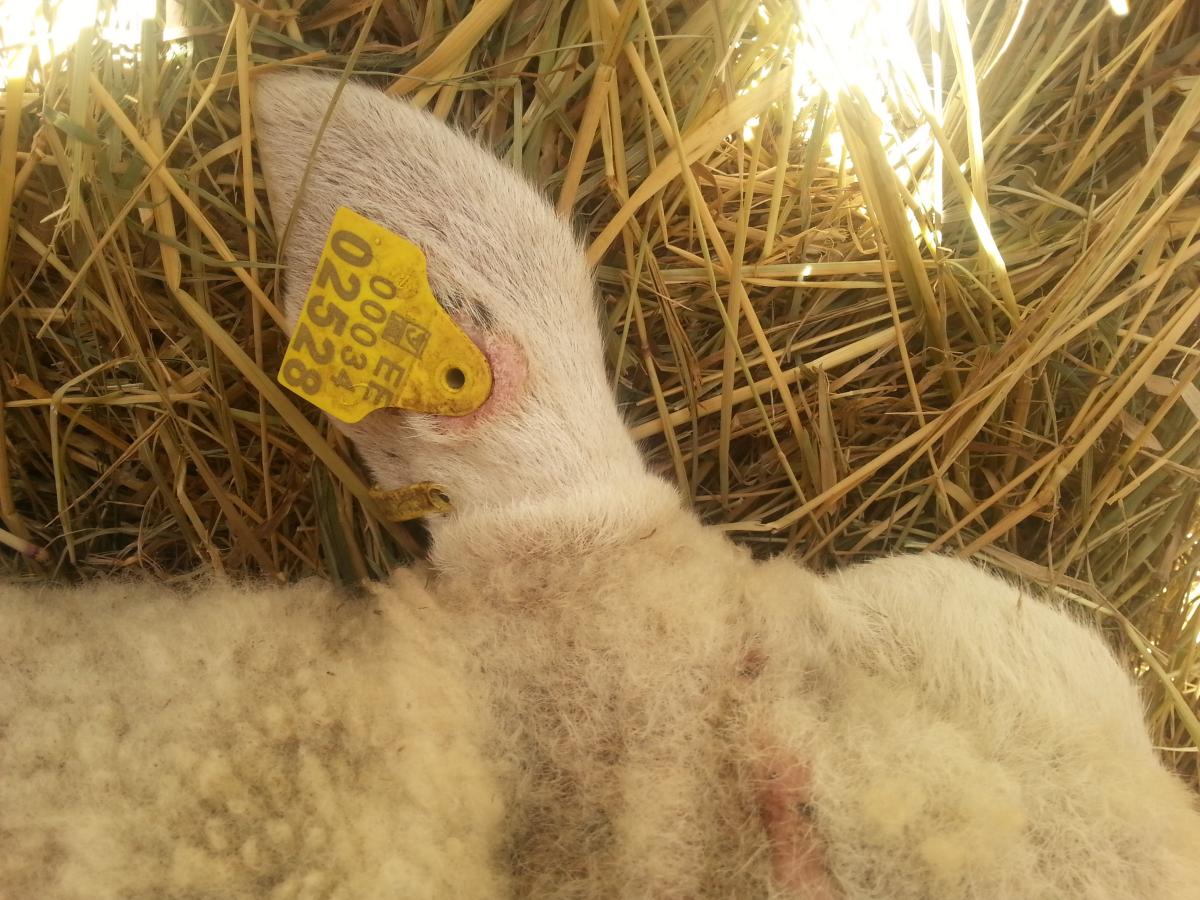 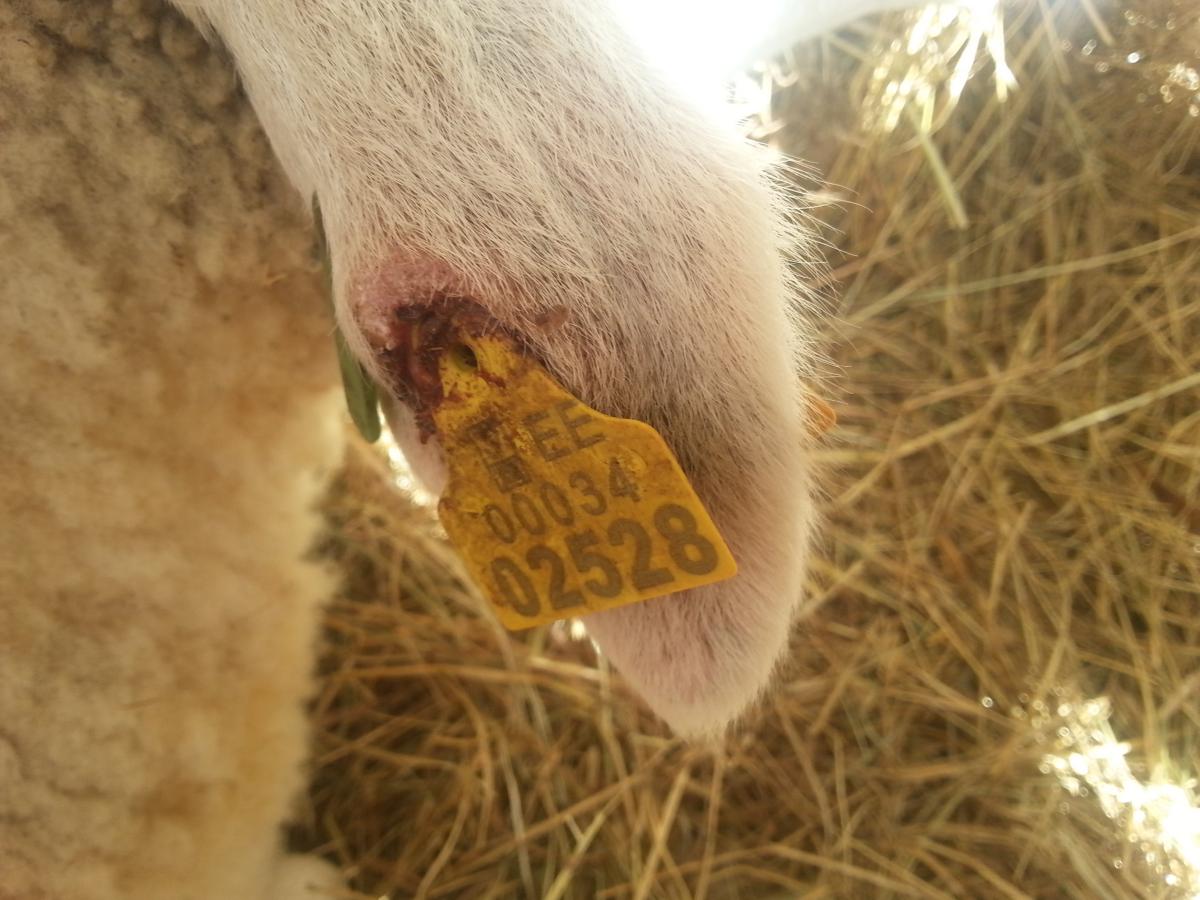 The summary is this: do not apply ear tags to sheep in hot weather or in summer at all, if possible – unless it is unavoidable due to economic or other reasons! The existence of ear tags are not really audited by anyone if you are a small-scale shepherd and it makes no difference if you apply them a couple of months earlier or later! At least I have learned a lesson: the well-being of animals is more important than following official requirements word-by-word, forgetting to take into account the context and the weather.

After having learned the lesson, I am starting to notice warnings on the same topic in literature. For instance in the book “Come Sheepy, Sheepy! Cute Sheepy, Sheepy!”, published in the KNOWSHEEP project, the author Annika Michelson writes, “Earmarking is a never ending problem for animal owners. Marking sheep is the easiest to do if you put them to sit on their rump. Then they will not be able to do any fast movements from the pain that they feel when you put on the earmark. Pain is individual, some say nothing whereas others tend to jump of fear. This work must be done quickly in order to avoid any accidents. Before the fastening you can disinfect the earmarking place. Avoid putting on earmarks when the weather is very warm, when there are a lot of insects or if the lamb is small. According to the law the ear mark must be put on before a lamb gets 6 months old.”