Ideally, kefir grains require a new batch of fresh milk every 24 hours (or a little more often, and it depends on the ratio of grains to milk).

Before the Coronaviruus pandemic broke out, it was no problem to quickly go and grab some milk from the shop every other day. And when I went to Tallinn (a couple of times a week), I sometimes bought non-pasteurized (raw) milk from an organic store. Just for experimenting. I’ll return to raw milk below.

In the middle of March 2020, Estonia went into an emergency situation and due to this, we stopped going to shops too often. Suddenly, it wasn’t possible to just grab something from the store on the way home. At the same time, it wouldn’t have been practical to buy 5-6 litres of milk at a time. This amount would take up much space in the fridge. And if using raw milk, that only stays fresh for a couple of days. On the other hand, you cannot really make kefir with a very large ratio of milk to grains once a week, as the optimal cycle of fermentation is still about 24 hours – the grains should be able to ferment the milk during this time. If not, the milk can just get spoiled (at least the pasteurized and homogenized milk we buy from the regular shop). With a larger amount of raw milk one might perhaps achieve something in between fermented milk and kefir, since raw milk has the organisms that enable it to get sour. Some sources say that you may make kefir in the fridge, to slow down the process, but only for a couple of cycles anyway.

Due to the circumstances, my kefir cycles grew longer. Slowly this turned into a survival test for the kefir grains. As I can read from my fermentation diary, the cycles were about 3-4 days from May to November. This didn’t seem to be a problem though. The kefir always overfermented (the whey and curds became separated and the whole stuff was pretty acidic), but I kept the amount of milk needed under control and the grains grew more slowly. Also I grew used to the extremely sour taste.

Another mistake I made was that based on some literature in Estonian (“Fermentation” by Toivo Niiberg) I decided I would wash the kefir grains each time I made a new batch of kefir. A weird kind of slime came out of the grains, which I tried to wash away, but by doing this I physically destroyed some grains. Later I learned that slime is a normal product of the life processes of the grains, part of these, a result of the action of bacteria. If you change milk every day, the grains are so compact that you never see the slime on the surface. What I experienced was probably a slow breakdown of the grains during several months, which is why slime appeared, which I tried to wash.

There seem to be controversial opinions about washing kefir grains in the literature. The information I have read in English, both in books and the web, seem to suggest that you shouldn’t wash the grains, in order not to flush away the bacteria and yeasts. Also we got similar instructions from Germany. At the same time, Niiberg claims that the grains should be washed each time a new batch is made. I have no idea if the author has any long-term experience with kefir grains.

In December, our grains living in two separate jars, reached their limit of endurance and stopped making normal kefir. The milk seemed to get fermented only in the very proximity of the grains whereas the rest of the milk remained liquid. In normal conditions though, the milk turns creamy and a bit sour in less than 24 hours, after which the curds and whey start to separate; the liquid whey sits at the bottom of the jar.

This is what normal kefir looks like after about 18 hours, where the whey is just about to become visible. The rest of the contents of the jar is cream and mildly sour: 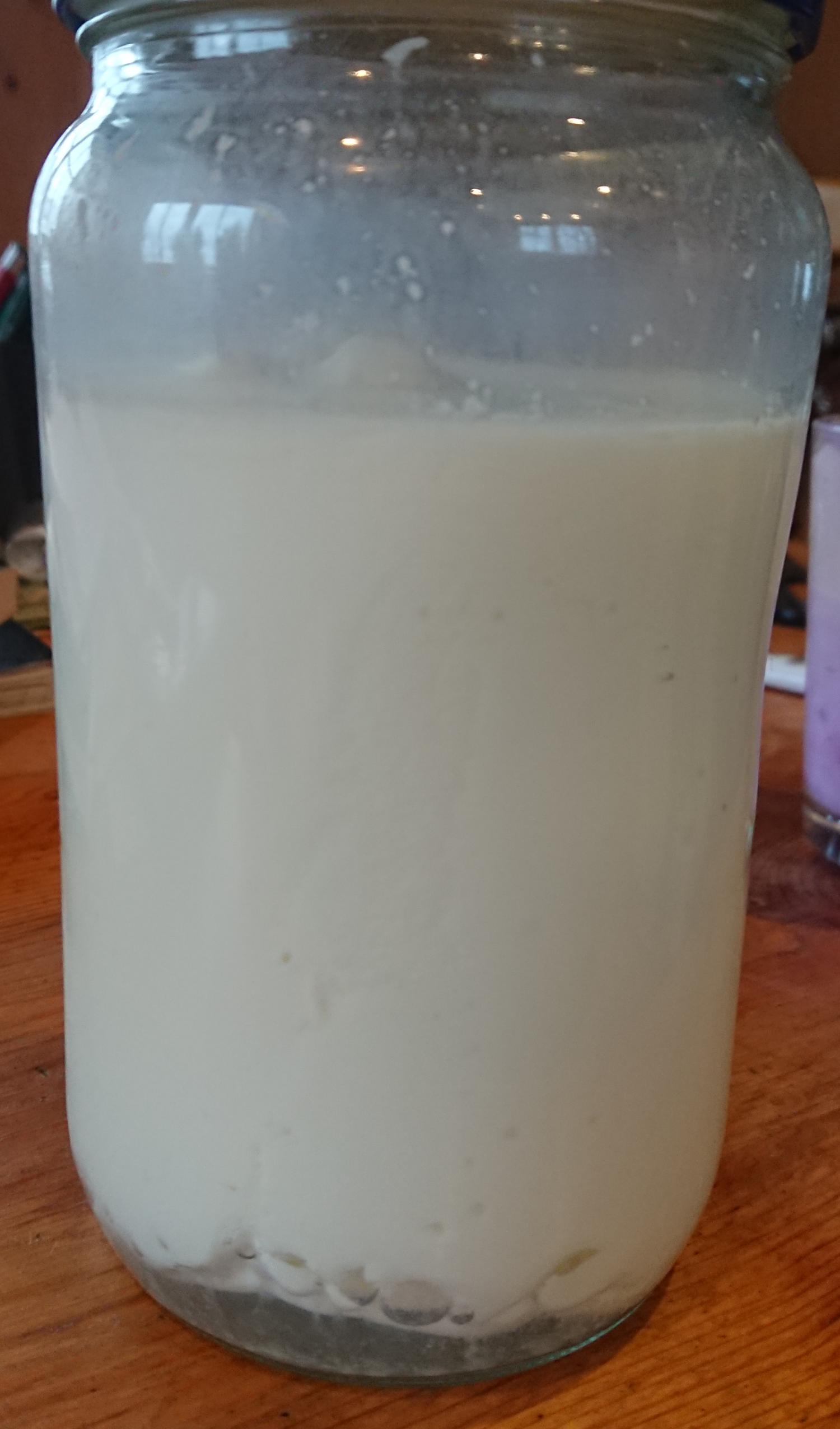 Kefir made by grains in a good condition

This is what the result looked like after the grains had become weak and unbalanced: 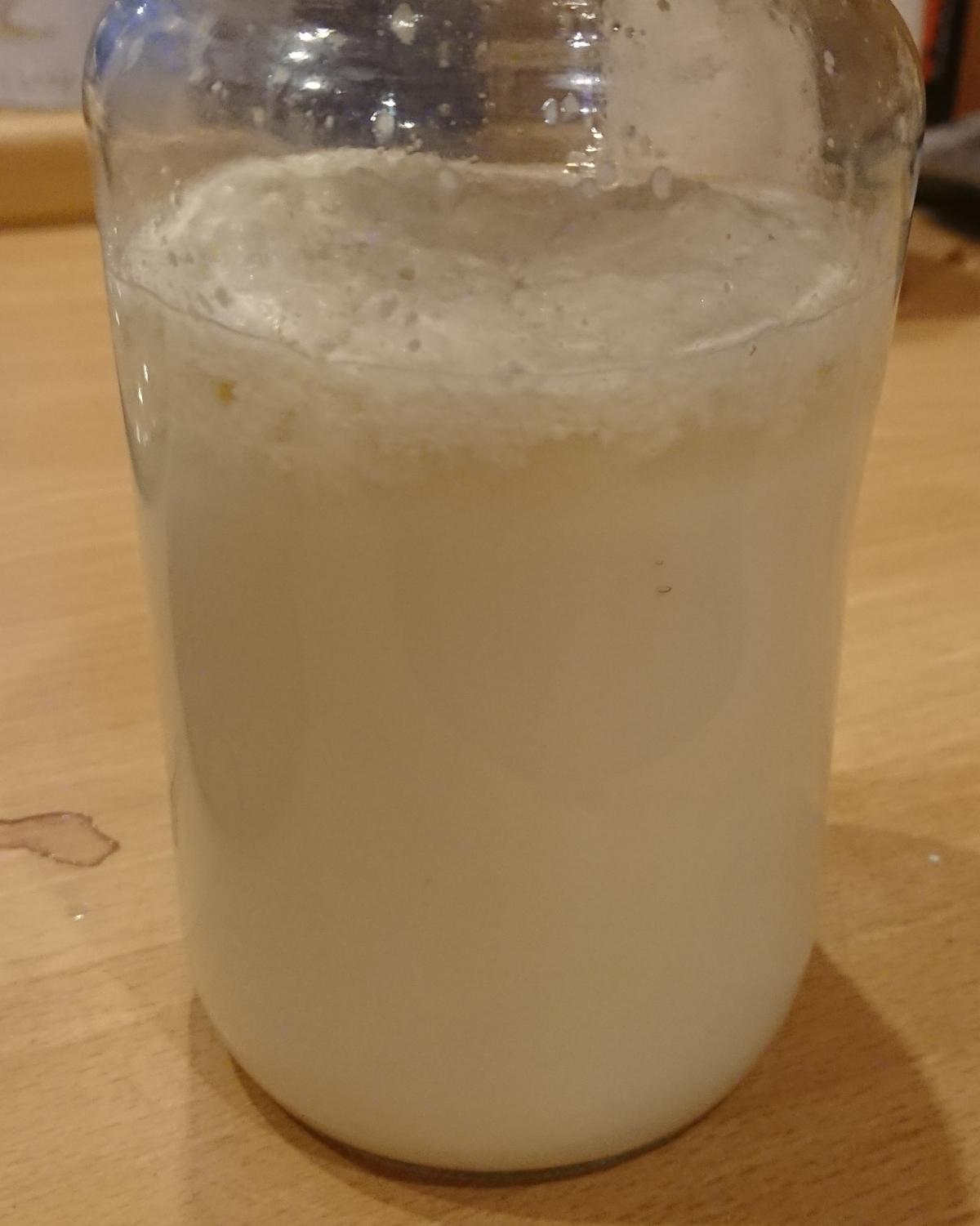 Kefir made by grains that are weak and unbalanced

Restoring the balance of the kefir grains

It turns out that there’s plenty of information in the internet on what to do if your kefir is not as expected (is too acidic or is not creamy etc). I took some advice from this page: https://www.yemoos.com/blogs/yemoos-blog/how-to-change-yeasty-kefir-into-bacteria-rich-kefir. It’s one of many online stores selling cultures for fermentation who also have quite sophisticated manuals, FAQ-s etc.

I got the impression that I had managed to kill the bacteria (or flush them as I washed the grains) and this had resulted in an overabundance of yeasts. The contents of the jar in the photo above, did indeed smell very yeasty. So I had to try and revive the bacteria. We chose two methods – overfermentation and using raw milk.

First, we let the weird kefir to sit for another 24 hours to see what would happen. What happened was that the whole contents turned into curd which was even edible! The taste was yeasty, though. The idea of overfermentation is to let the bacteria have enough time to feed after the yeasts have had enough.

Next, I took one of my batches of kefir grains that I had stored in the freezer for backup, to make raw milk kefir, which in turn would help me restore the weak and unbalanced grains. Buying raw milk is surprisingly hard in winter, during a pandemic and outside of Tallinn! But the idea of the experiment was that the bacteria in raw milk should be able to help the bacteria in the grains to grow, and to balance the activity of the yeasts.

Luckily, the batch of grains I restored from the freezer produced a nice batch of raw milk kefir, with which I was able to revive those grains that I had almost killed. I followed the advice on the page above, to mix some good kefir with regular milk. So I managed to get the grains back to their expected power – about 10 grams of grains make creamy, a bit effervescent kefir out of 500 ml of regular pasteurized full-fat milk.

Some of the restored grains look like this (there’s a piece 3 cm in diameter in the photo). Here it has been washed prior to being frozen. NOTE! Grains in a good condition don’t “leak” any slime and when washed gently they don’t break apart! 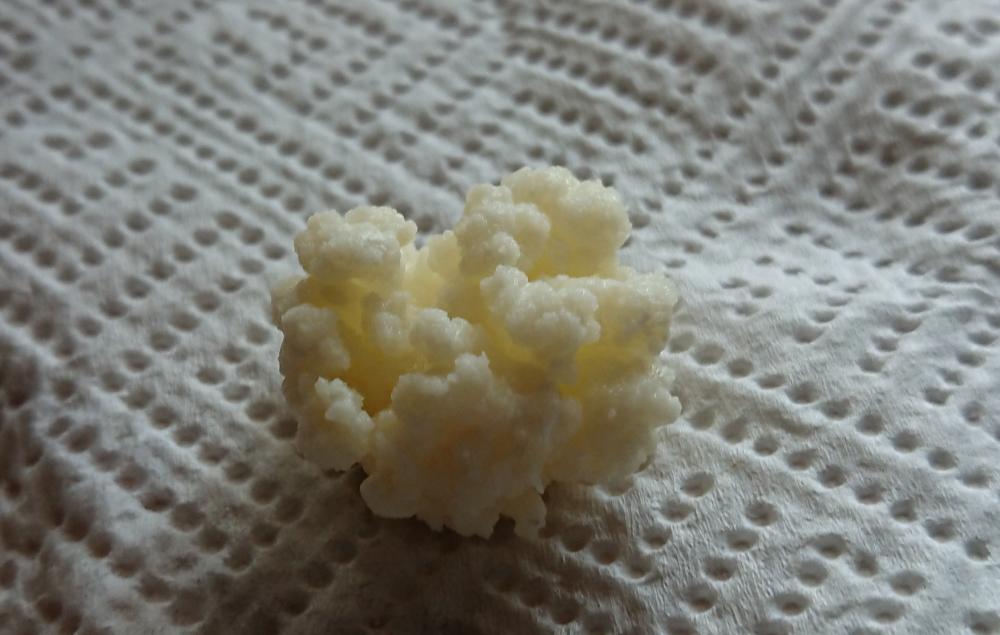 In the future, I will only wash the grains before freezing (for backup), and only those in very good condition.

In the winter of Coronavirus 2020/2021 we attempt to plan our shopping so that we’ll buy 4 litres of milk at a time, and at the same time I have been backing up some grains regularly. If possible I’ll try and get some raw milk from now and then to keep the bacteria strong.

So our grains are fully vital again and we have gained a useful experience, too – and I’ll be more careful with the schedule of fermentation and backing up the grains in the freezer.

If someone in Estonia is interested, we can sell frozen grains for 5 EUR. The contacts are here.

In the end of last year (2019) when the world didn’t know much about Coronavirus and the crisis it would cause, we went to Leipzig, Germany, to participate in the Chaos Communication Congress with around 17,000 other attendees. It’s an old hacker conference that has grown a lot in scope over the years. Among other events and workshops we found a workshop for making milk kefir, organized by the FHB! And we brought home a small piece of milk kefir grains in a small bottle in milk, in hand luggage, carefully hidden in a pocket, so that we could grow it and drink home-made kefir.