Due to a very warm winter, our pond has been without ice during the last couple of months, the water level has risen to the max due to lots of rain, and so we have allowed our ducks to spend time on the pond quite a lot, too. Always knowing that probably the hawk will attack them sooner or later. In the middle of January on a Sunday afternoon, it did indeed attack.

The hawk was frightened away by our arrival but it had already managed to do harm to one of the ducks – a beautiful dark brown runner duck about two years of age. She was one of those I hoped we could get ducklings from once more. After the attack, the duck couldn’t keep up with the rest of the flock and hid away amongst the plants at the edge of the pond.

Sven managed to catch the injured duck and we took it inside to our house to recover, also so that we could further examine what was wrong with it. In the first evening all she did was pant rhythmically. She had no visible injuries whatsoever besides some blood from one of the nostrils. She kept leaning against the wall of the box we put her in, and she couldn’t stand up well.

Firstly, we tried to get the duck drinking again – and I hoped that when playing with water, the duck would cleanse her nostrils where blood had got stuck. After a couple of days the duck got well enough to be able to drink water from the small bath independently, and to wash her nostrils, but she couldn’t really stand up yet. With a sense of black humor we filmed her drinking on Friday night. In the video you can see that she still can’t breathe through her nostrils properly. And note that although the WC has a tiled floor, it’s not really slippery and after the duck had gained balance later on, she didn’t slip on the floor anymore.

Learning to Eat Again with the Help of Fly Larvae

While the duck started drinking fairly soon, we had more trouble with getting it to eat again. She had no interest whatsoever in pellets or grains, the usual feed we use. Because we have no winter this year, I managed to find some earthworms for her in the garden. The duck really liked these so I came up with an idea of trying live feed that is available from fishermen’s stores. In one such store, they recommended fly larvae (“usually these are bought for ducks” – I wonder why one would regularly buy larvae for ducks?) and these worked really well. 10 grams of larvae cost about 1 euro and you can store these in the fridge for a couple of days. Unfortunately we made no close-up photos of the larvae but in the following video you can see how the duck picks only the larvae from the bowl that is full of pellets and grains. In this quite boring video, pay attention to the head of the duck and the method of basically hunting larvae. Once she notices movement, she gulps the larva. We fed her the larvae for about 4 days and after that we quit. It seemed that once she got used to eating from the bowl, she managed to eat some grains too, at least enough to keep her alive.

It took a couple of more days, and we also took the duck outside to re-learn walking, and her balance came back. In this video, the duck is playing with grass that I picked outside, and she is standing nicely on both feet. Also note that no panting through the mouth can be seen anymore. She’s just a bit talkative. During the last days of her stay in our house, she got so used to us that she let herself be stroked (runner ducks are usually very much afraid of people and nervous).

It was around the 10th day after the attack when we felt it was OK to take the duck back to the other ducks and the chickens. By the way, we assumed that the greatest threat to her would be the chickens who have previously killed one duck that was in molt, and they have killed some quail, and they in general seem to be bloodthirsty. Fortunately the recovering duck looks so fine and also stays with the rest of the duck flock so that at least during the first 2 weeks after her, the chickens haven’t attacked.

However, I have noticed that the duck keeps her lower body more towards the floor than is normal in runner ducks when standing or running. The following photo has very bad quality and the birds are moving but the main character standing in the foreground, has a visibly different posture from the rest of the ducks. 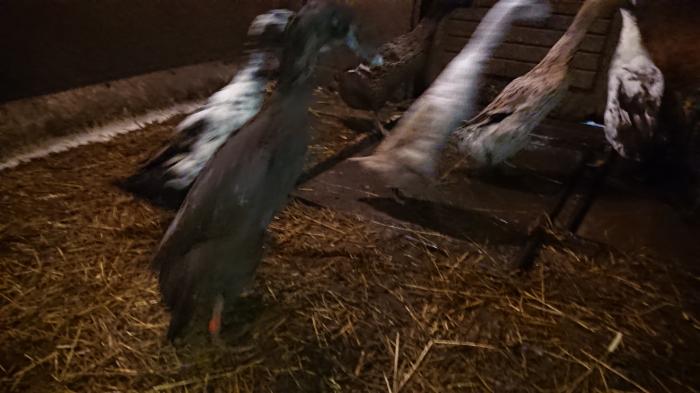 Time will tell if there will be drawbacks in her recovery or if the duck will fully recover to live long and prosper.